From October 28, in line with the Moscow city government decree, a QR code and ID are required in order to visit Garage.

OEI № 60-61 2013, Extra-Disciplinary Spaces And De-Disciplinizing Moments. In And Out Of The 30th Bienal De São Paulo 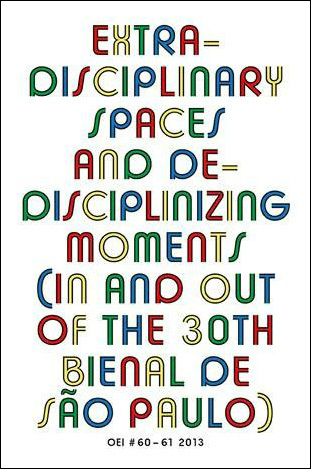 OEI № 60-61 2013, “Extra-disciplinary spaces and de-disciplinizing moments. In and out of the 30th Bienal de São Paulo”, is not a delayed catalogue of the 30th Bienal de São Paulo, “The Imminence of Poetics” (2012). While documenting selected parts of this immense Bienal, OEI № 60-61 is conceived as a reading of the works and effects produced by it, reformatting this material and creating new montages between the works and documents in the aesthetic medium which is the magazine. Departing from the Bienal, OEI № 60-61 is also extending or supplementing aspects of it by commissioning new texts or works by participating artists. OEI is a magazine for extra-disciplinary spaces and de-disciplinizing moments — experimental forms of thinking, montages between poetry, art, philosophy, film, and documents; editorial enunciations and aesthetic technologies, alternative historiographies and speculative ethnographies. OEI was founded in 1999 and has published about 60 issues of the magazine. The publishing structure OEI editör was initiated in 2002 and has published some 60 books of conceptual poetry, aesthetic documents, theoretical and poetological texts etc. Since 2011 OEI also runs the micro-gallery OEI Colour Project in Stockholm.