Open discussion How to Gather 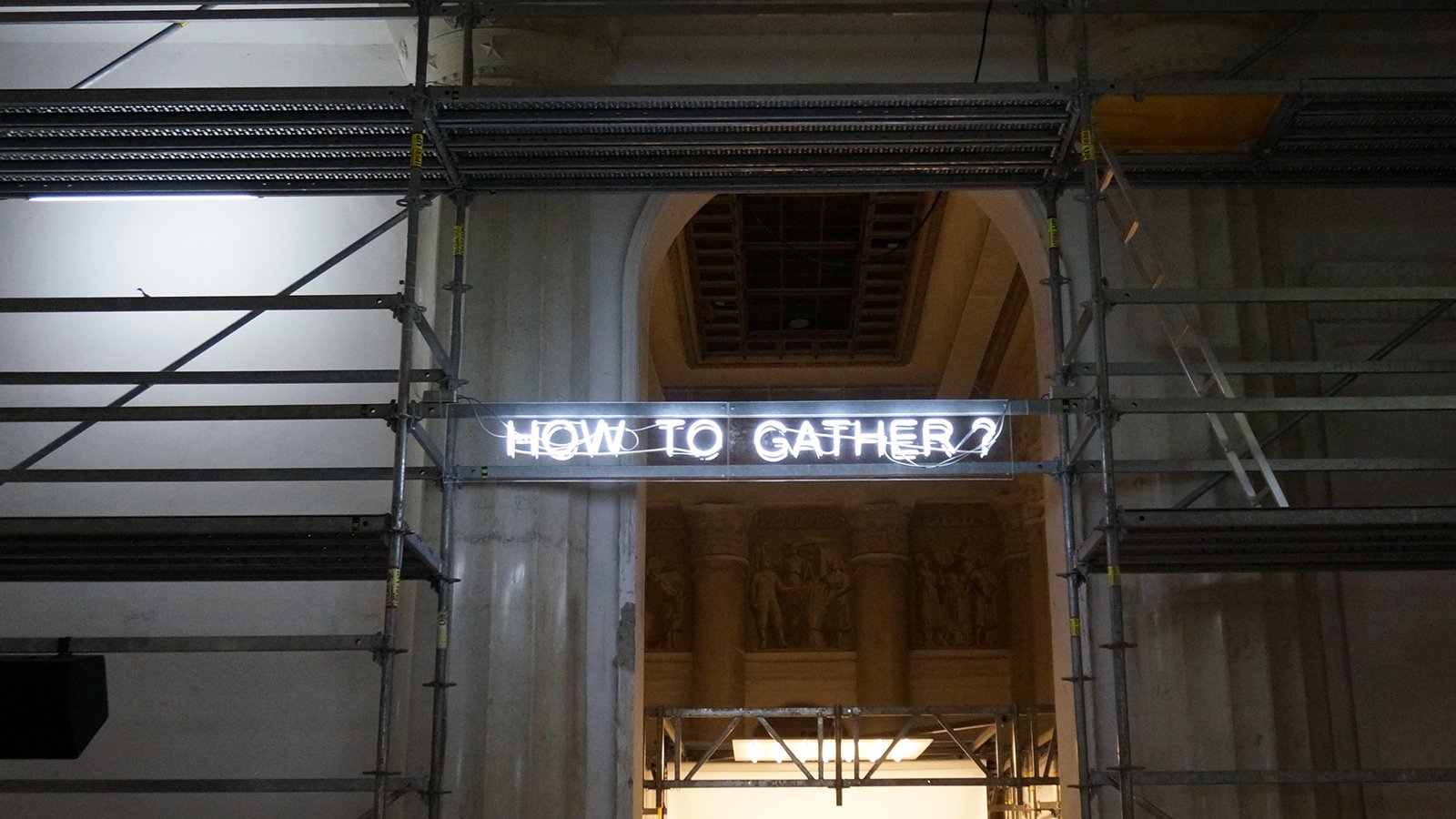 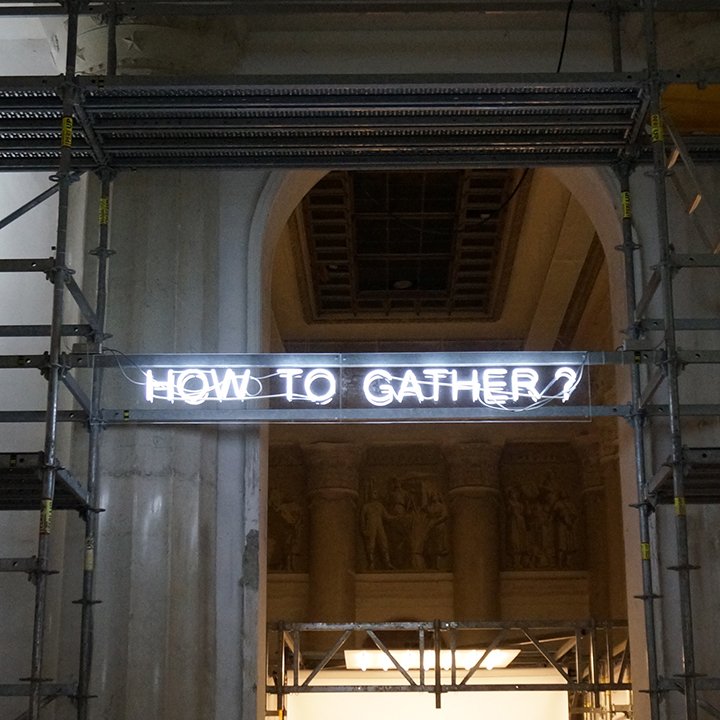 Garage Museum of Contemporary Art and V-A-C Foundation will host an open discussion on new ways of co-habitation. Russian and international experts will review the current, and try to imagine the future, cultural models of collectivity and public sphere that will allow us to build a space of togetherness and maintain a network of meaningful connections within it.

A discussion on coexistance as a phenomenon of the contemporary world marks the publication of the book How to Gather. The book contains experimental recipes of co-habitation from more than fifty participants of the 6th Moscow Biennale of Contemporary Art.

The participants will try to find together answers to key questions related to the contemporary institution building: how to live together given the dramatic confrontations and collisions of today's world? What measures need to be taken to ensure that artificial and sometimes destructive co-habitation becomes more organic and stays that way?

How to live together?

The globalised world at the onset of the twenty-first century is hyper-connected, but at the same time ever more rife with conflict and antagonistic impasses. How to Gather brings together a remarkable group of cultural and scientific practitioners who reflect on the conditions as how to overcome this, in the span between the individual and the world.

The publication is an outcome of the 6th Moscow Biennale for Contemporary Art 2015—a ten-day programme that enacted the question of gathering.

Kate Fowle is Chief Curator of Garage Museum of Contemporary Art and Director-at-Large at Independent Curators International (ICI) in New York, where she was Executive Director from 2009 to 2013. Prior to this, she was the inaugural International Curator at Ullens Center for Contemporary Art in Beijing. From 2002 to 2007, Fowle was chair of the Master’s Program in Curatorial Practice at California College of the Arts in San Francisco, which she co-founded in 2001. Before moving tothe USA, she was Co-Director of Smith + Fowle in London (1996–2001) and curator at the Towner Art Gallery in Eastbourne (1993–1996). She graduated with a Fine Art degree from Norwich School of Art and was awarded the Arts Council of England Traineeship in Curating from 1991-1993.

Francesco Manacorda is Artistic Director at the V-A-C Foundation. He occupied the position of Artistic Director at Tate Liverpool from 2012 to 2017. Manacorda holds a Degree in Sciences of Education from the University of Turin and an MA in Curating Contemporary Art from the Royal College of Art in London. He was Curator at the Barbican Art Gallery from 2007 to 2009. From February 2010 to March 2012, he was Director of Artissima, the international fair of contemporary art in Turin. He has been Visiting Lecturer in Exhibition History and Critical Theory at the Curating Contemporary Art department at the Royal College of Art, London from 2006 to 2011. In 2013 he was a member of the International Jury for the 55th Venice Biennale. He is currently Visiting Professor at LJMU School of Art and Design in Liverpool. An experienced art writer he has published articles and reviews in a wide range of arts publications and edited numerous publications such as Glenn Ligon: Encounters and Collisions (2015), Cathy Wilkes (2015), Mondrian and his Studio (2014), Art Turning Left (2013), Radical Nature (2009), Martian Encyclopaedia of Terrestrial Life–Vol. VIII: Art (2008) and written for several artist’s monographs.

Bart De Baere is director of M HKA in Antwerp, the contemporary art museum of the Flemish Community in Belgium. Since its merger with the Centre for Visual Culture in 2003, M HKA has become active within visual culture at large. It calls itself a ‘Eurasian museum’, advocating for a greater European openness towards Asia, that vast island of which Europe is actually only a peninsula. M HKA grounds itself in the avant-garde of the period after the Second World War, for which the city of Antwerp was an important hub. This international, open tradition is continued by the museum into an openness to the multipolar world of today.

De Baere worked at the Museum of Contemporary Art in Ghent, where he curated numerous exhibitions, notably This is the show and the show is many things in 1994. He was also one of the curators of Documenta IX in Kassel (Germany), a consultant for the city of Johannesburg involved in establishing its first biennial, a member of the International Advisory Council for the network of Soros Institutes for contemporary art in Eastern Europe, a co-founder of the Brussels Kunsthalle ‘Wiels’, and 6th Moscow Biennale.

De Baere has written and published extensively on art and on institutional issues.

Defne Ayas is director of the Witte de With Center for Contemporary Art in Rotterdam. During her directorship, Witte de With (co-)curated and commissioned long-term projects, group exhibitions and solo projects, including Kunsthalle for Music by Ari Benjamin Meyers (2017–2018); The Music of Ramon Raquello and his Orchestra by Eric Baudelaire (2017); Öğüt & Macuga by Ahmet Öğüt and Goshka Macuga (2017); The Ten Murders of Josephine by Rana Hamadeh (2017); Relational Stalinism – The Musical by Michael Portnoy (2016); Art in the Age of…, a three-part series with focus on energy and raw materials, asymmetric warfare and planetary computation (2015); Bit Rot by Douglas Coupland (2015); Character is Fate by Willem de Rooij (2015); Blueprints by Qiu Zhijie (2012); The Humans, a theatrical play by writer and artist Alexandre Singh – and its monthly summits Causeries (2012–2013) as well as the award-winning exhibition The Temptation of AA Bronson (2013). Ayas has worked on a number of biennial projects as: curator of the Pavilion of Turkey in the 56th International Art Exhibition, Venice Biennale; co-curator of the 6th Moscow Biennale; co-cura­tor of the 11th Baltic Triennale; city curator for the 9th Shanghai Biennale and curator-at-large at PERFORMA in New York and Spring in Hong Kong.

Sepake Angiama is a curator and educator, whose interest lies in discursive practices, the social framework, and how we shape and form our experience in understanding the world. This has inspired her to work with artists who disrupt or provoke aspects of the social sphere through action, design, dance, and architecture. While in her position as Head of Education, Documenta 14 she initiated the project Under the Mango Tree: Sites of Learning in cooperation with ifa (Institut für Auslandsbeziehungen) which gathers artist-led spaces, libraries and schools interested in unfolding discourses around radical education practices that destabilize the European canon, through examining notions of unlearning and indigenous knowledge. Previously she was the Head of Education for Manifesta 10 hosted by the Hermitage Museum, Saint Petersburg. She is currently a Fellow for BAK (basis von actuele kunst) where she addresses through her research, Her Imaginary, how science fiction may be the perfect tool for capturing a political and social imagination.

Ilya Budraitskis is a publicist, historian, art critic. He is also a member of the editorial boards of Moscow Art Magazine and LeftEast. His texts are regularly published in E-flux (New York), WdWReview (Rotterdam), Krytyka Polityczna (Warsaw), NZ, Colta.ru, Seance, etc. He is an editor and co-author of the books Post-post-Soviet? Art, Politics and Society in Russia in the Turn of the Decade (Chicago University Press, 2013, in collaboration with Ekaterina Degot and Marta Dziewanska) and Pedagogical Poem (Marsilio Editori, 2014, in collaboration with Arseny Zhilyaev), and author of Dissidents Among Dissidents (Free Marxist Publishing, 2017), which was nominated for Andrey Beliy Prize in the category ‘Research in Humanities’.