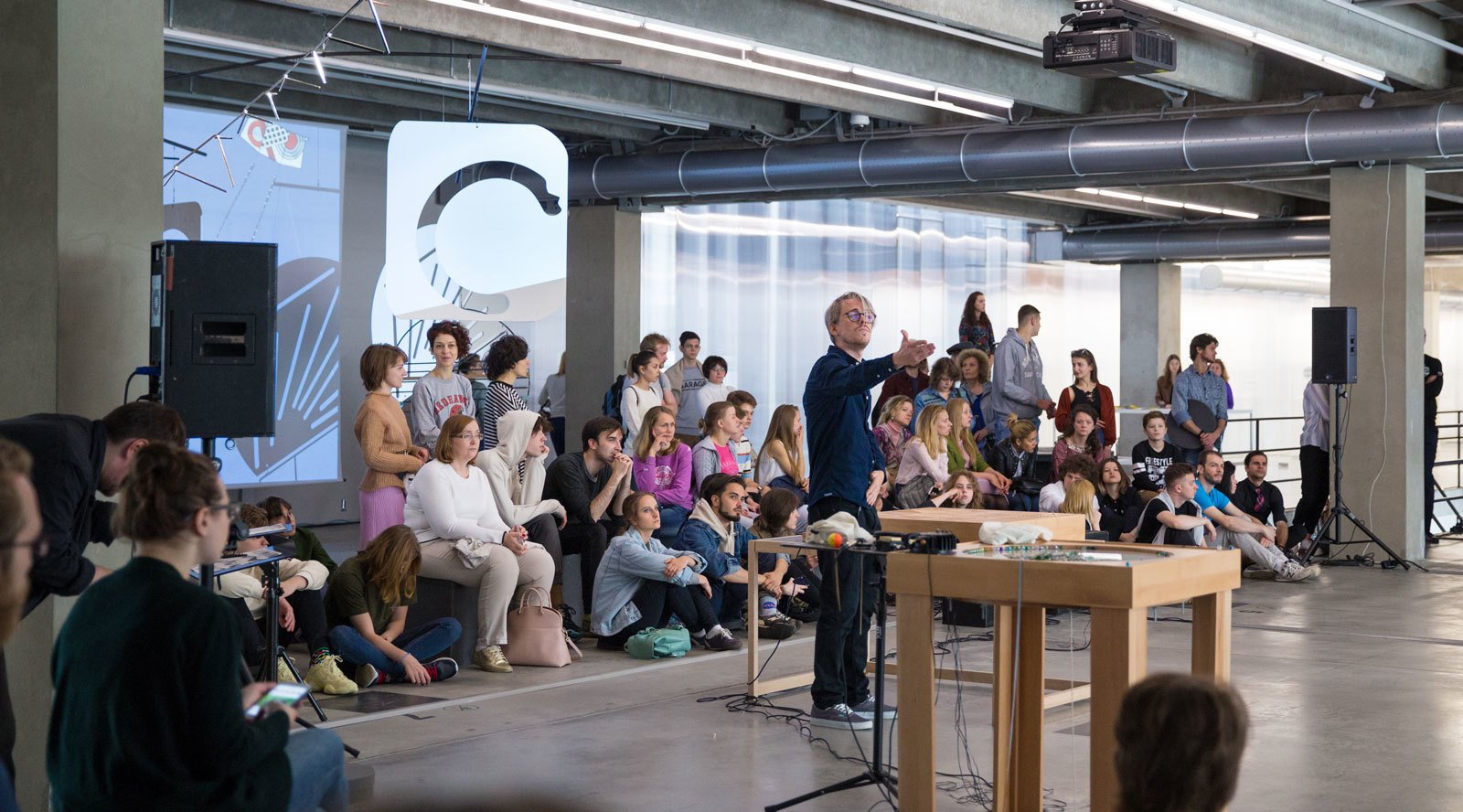 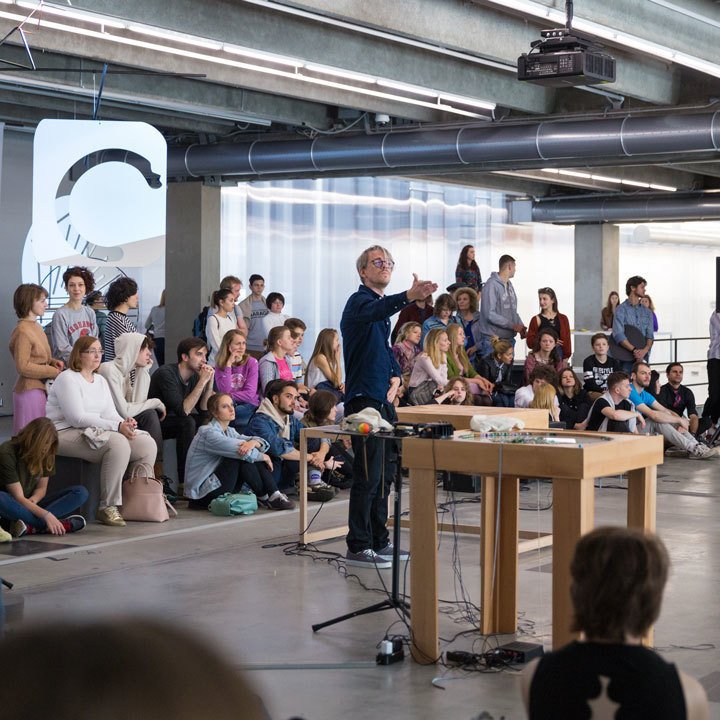 Instruments from Tarek Atoui’s WITHIN collection are a key part of Infinite Ear. For the major part of the exhibition, visitors experienced them as still museum objects of an incredible history and beautifully minimalist design displayed to a pre-programmed soundtrack. Occasionally, the instruments were played by mediators: in the hands of performers, machines created by Tarek Atoui and his collaborators revealed their meaning and function of making music accessible to everyone.

The final concert in the exhibition will be played by an avant-garde music historian, sound artists, an experimental vocal performer, and a young participant of Tarek Atoui’s workshop for deaf children, which took place before the exhibition opened. Tarek Atoui has selected participants from dozens of applicants, based not only on their professional achievement but also passion, innovative approach to playing instruments, and interest in integrating the ideas behind Infinite Ear into Russian practice.

Sasha Pas (b. 1980, Zhykovsky) is an artist and founder of Playtronica studio. Pas works with interdisciplinary practices exploring new types of interaction between man and technology with the help of sound as a medium. Playtronica projects imply immersion in the sensory reality where, by playing with various objects, anyone can creatively and freely put to test the possibilities of their body and the external world. This context of interaction no longer supports the division into the viewer and the artwork, allowing each participant of this communication process to actively contribute to the creation of a live, constantly changing environment. Playtronica projects have been exhibited at Garage Museum of Contemporary Art, The Jewish Museum (Moscow), Solyanka VPA Gallery (Moscow), Exploratorium (San Francisco), Centre Georges Pompidou (Paris), and Palais de Tokyo (Paris). Pas has participated in the parallel program of the Moscow Biennial of Young Contemporary Art (2018); Sonar+D Festival (Barcelona); Loop (Berlin); Performance Pets (London). Playtronica has received of a number of awards, including the award of Moscow Design Biennial (2017) and a special prize at the Synthposium Festival (2017). Pas lives and works between Moscow and Berlin.

Boris Shershenkov (b. 1990, Vladivostok) is an engineer and sound artist, media archaeologist and musical instrument designer from Saint Petersburg. He is engaged in a variety of activities in the field of experimental electronic music and known as the author of sound installations and audiovisual performances and as curator of concert programs, exhibitions and educational projects. As musician, he actively works in the areas of live electronics and electroacoustic improvisation, both solo and in collaborations with local and foreign musicians such as Ilia Belorukov, Konstantin Samolovov, Sergey Filatov, Sergey Kostyrko, Alexey Borisov, (Russia), Pascal Pellan (France), Harald Fetveit, Fredrik Rasten (Norway), Ryoko Akama (UK/Japan), and others. Participant in numerous experimental and electronic music festivals such as Podgotovlennye Sredy (Moscow), Dark Sounds in the White Nights (SPb), Apozicia (SPb), Geometry of Now (Moscow), Noise and Fury (Moscow), Electromechanica (SPb), Mediaspank (St. Petersburg), Cyberfest (St. Petersburg), and others.

Andrey Smirnov (b. 1956, Moscow) is founder of the Theremin Center, researcher and senior lecturer at Moscow Conservatory Center for Electroacoustic Music, and teacher at Rodchenko Moscow School of Photography and Multimedia. Since 1976, Smirnov has been initiating independent research projects in the field of music technology, specializing in the development of interactive music systems using sensory technologies for the analysis and interpretation of the performer’s actions. Participant of multiple international conferences and festivals; curator of exhibition projects in Russia and Europe; author of dozens of articles and the monograph Sound in Z, dedicated to the forgotten history of sound art and sound technology in Russia in the first half of the twentieth century (Walther Koenig Publishing House. London, Cologne, 2013). He lives and works in Moscow.

Alexander Olifir (b. 2005, Moscow) is a hard of hearing student of Moscow’s Technological College №21. His hobbies include football, martial arts, volleyball, drawing, and wood carving. 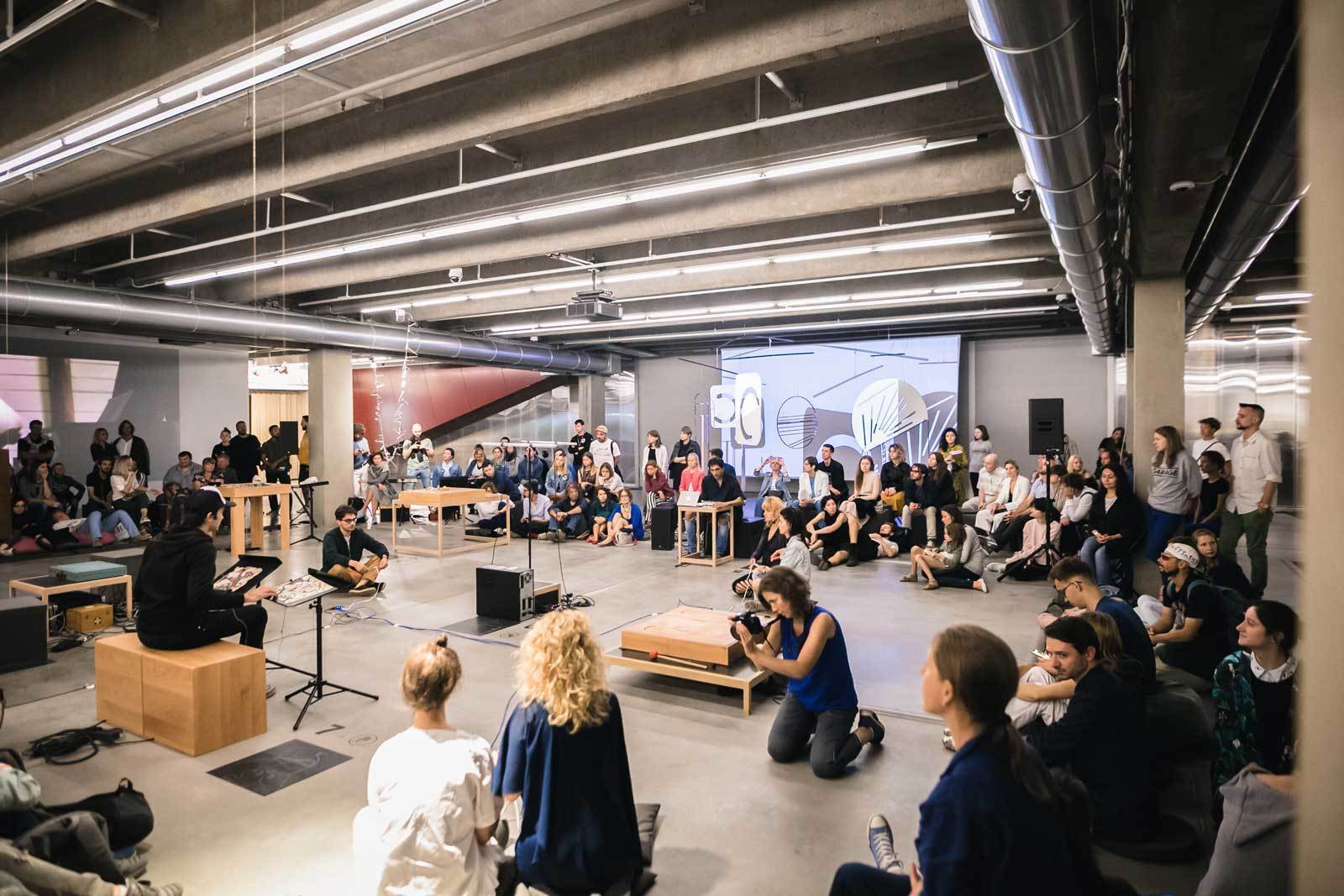 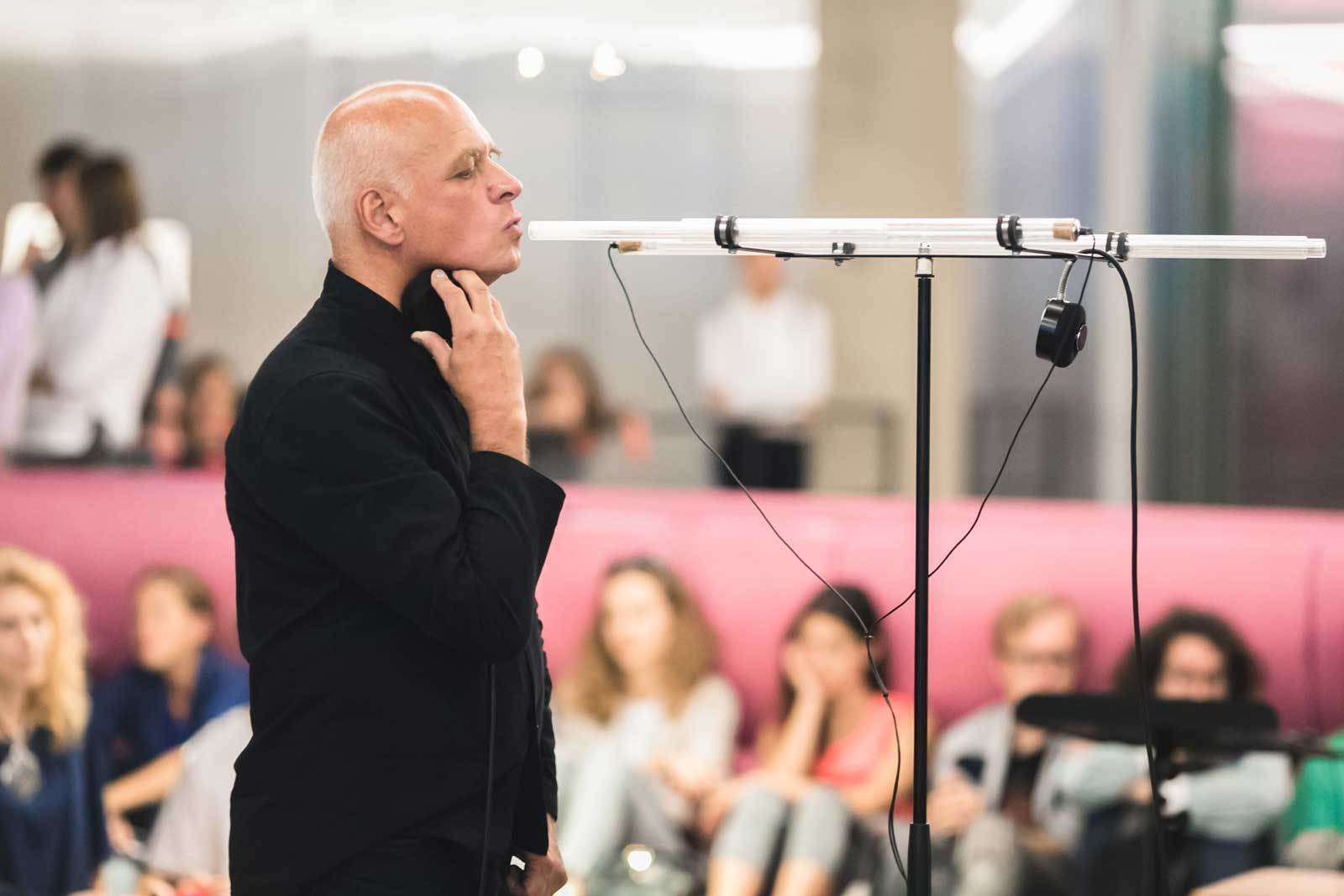 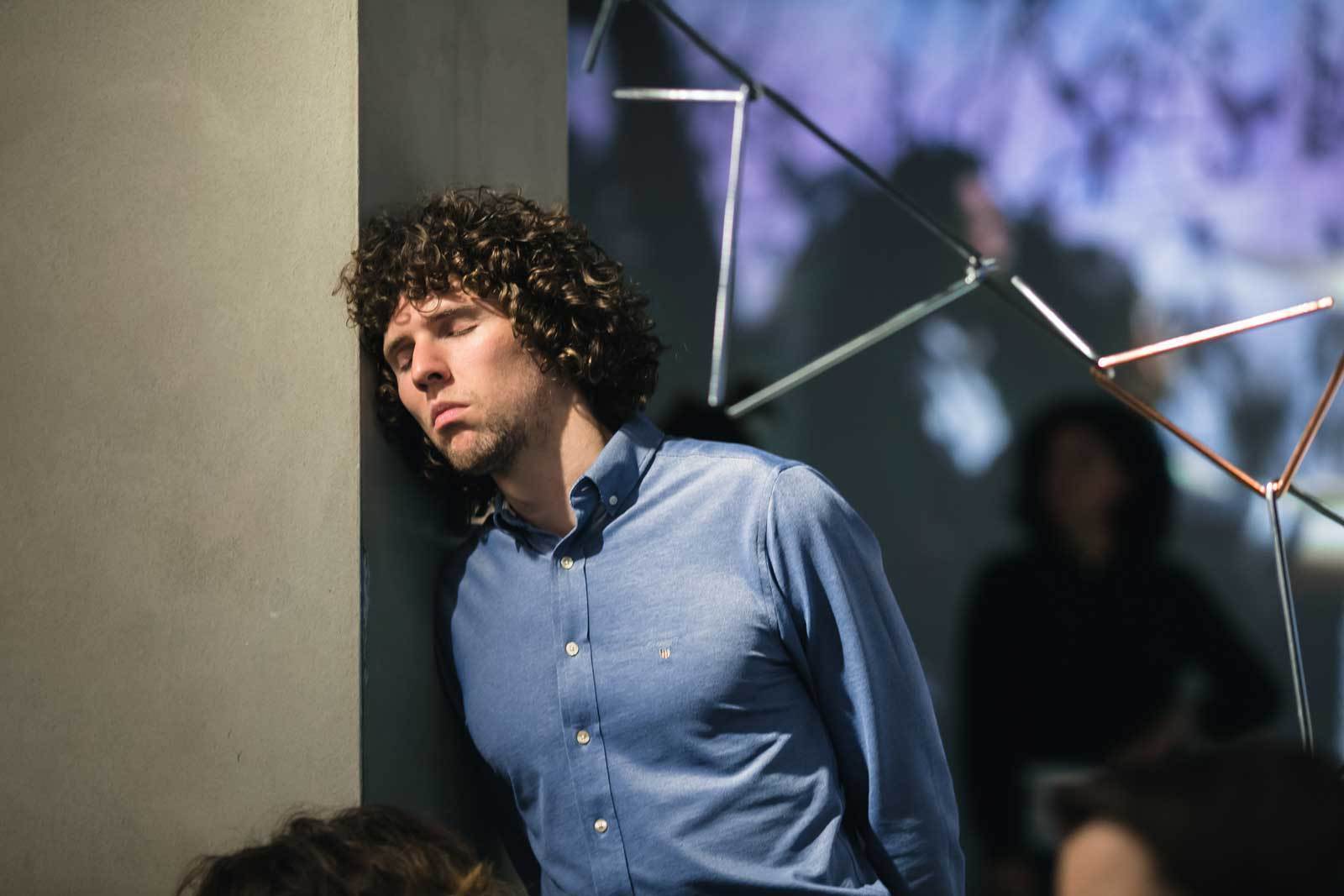 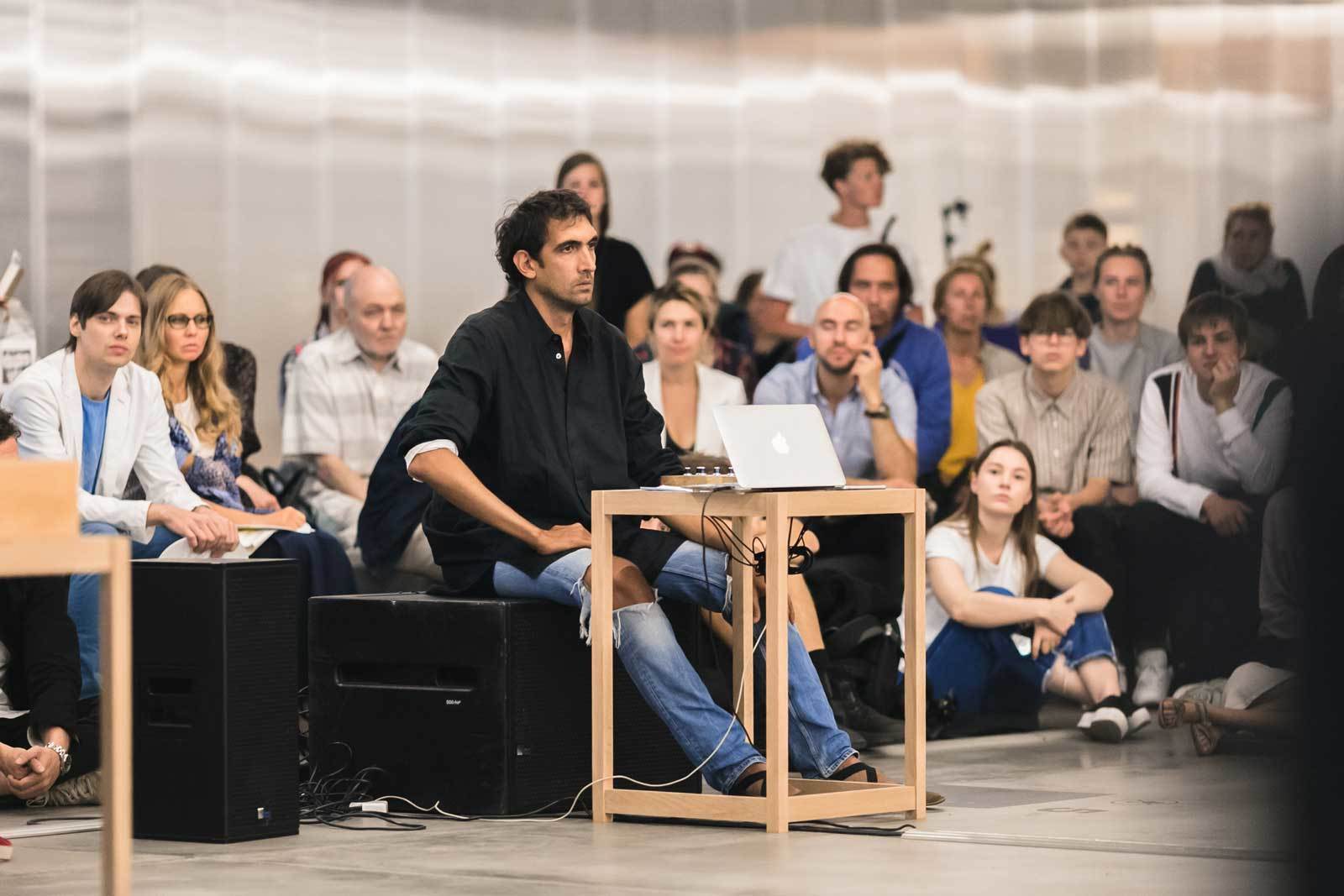 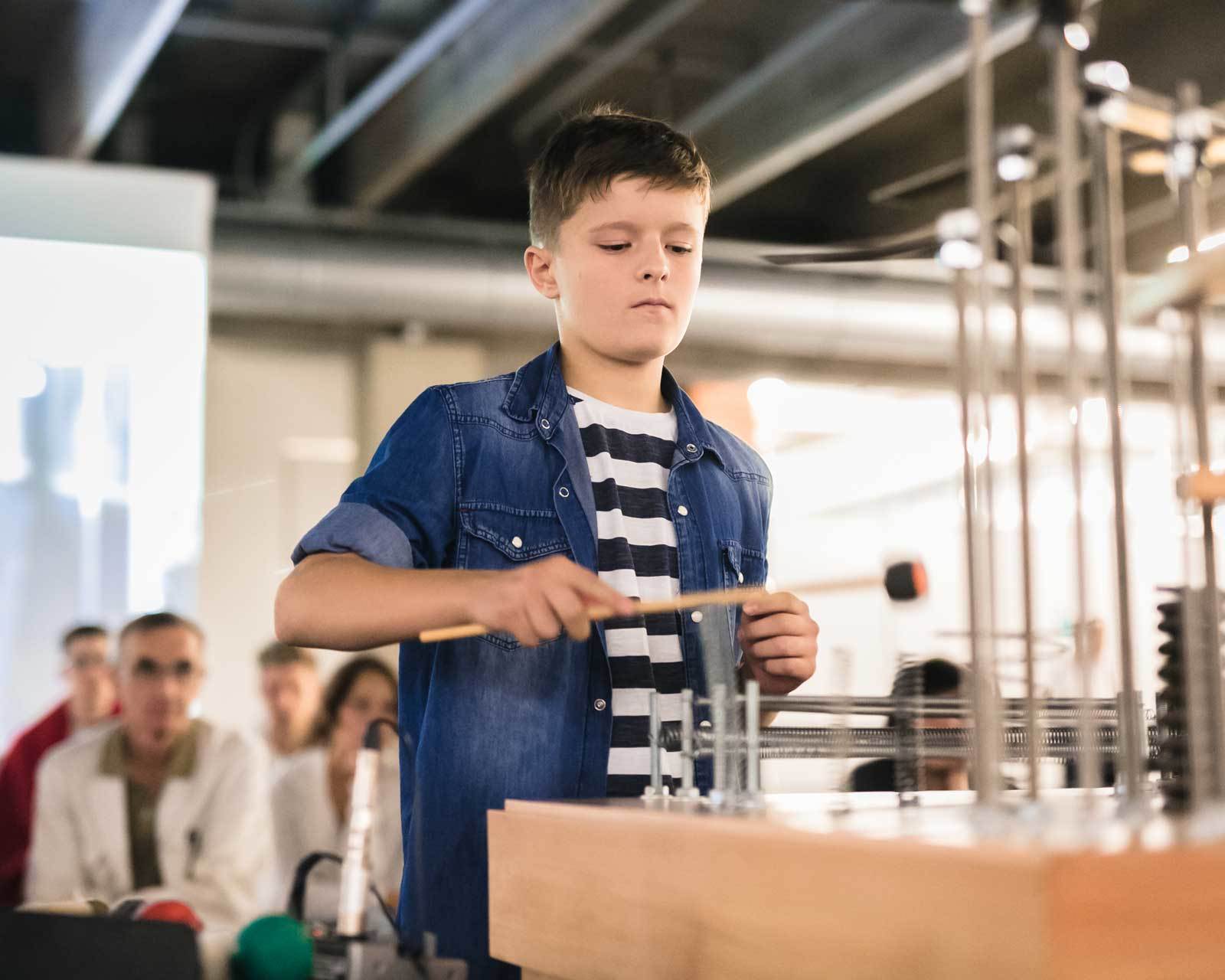 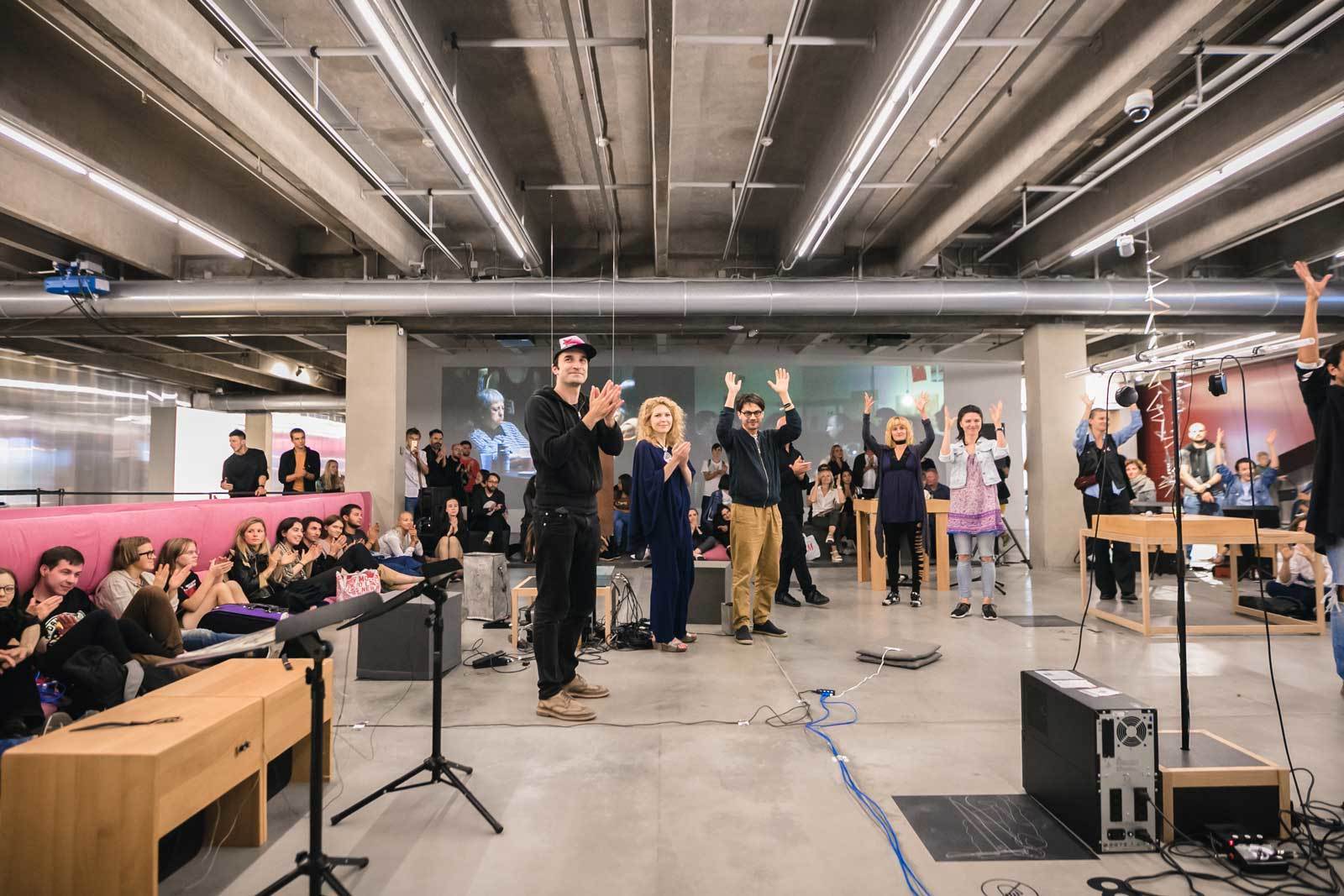