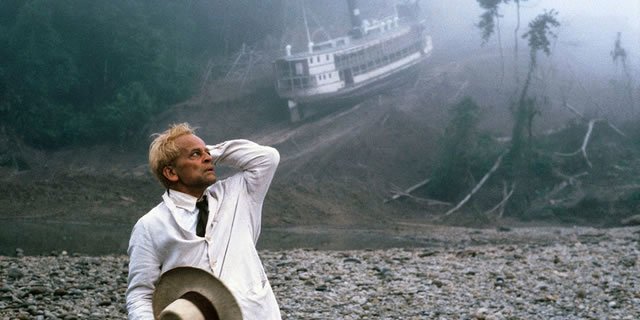 Brian Sweeney ‘Fitzcarraldo’ Fitzgerald, is an eccentric and a dreamer, obsessed with the idea of creating his own opera house in the jungle. Written and directed by Werner Herzog, this epic film not only became one of the highlights of his cinematic activity, but also a magnificent proof of the vitality and power of the human will to make a dream reality.

Fitzcarraldo takes a steamship up a tributary of the Amazon, in order to reach the rubber region — the only reason he was given the rights to use the land — which is actually inaccessible. Abandoned by most of his crew, he gets into an almost hopeless situation in an untouched region inhabited by the indigenous people who are hostile to outsiders. Caruso's arias echoing in the jungle fascinate and placate them. They view the ship as a mythical object that will help rid them of the curse that lies over the land and help Fitzcarraldo to realize his absurd project. Since the river, which would lead directly to the rubber region, is impassable due to rapids, Fitzcarraldo tries to get there via another tributary of the Amazon—but to do so the ship must first be transported over a mountain.

Gilles Deleuze has called Herzog “the most metaphysical of cinema directors,” and this performance should be viewed straightforwardly. “…a man who is larger than life, frequents a milieu which is itself larger than life,”—this heroic in its uselessness action, doubles and discovers its cause in sublime action: “There is thus both a hallucinatory dimension, where the acting spirit raises itself to boundlessness in nature, and a hypnotic dimension where the spirit runs up against the limits which Nature opposes to it”. Hence, in Fizcarraldo, the heroic passage over the mountain “is even more directly the means of the sublime… the whole virgin forest becomes the temple of Verdi’s opera and Caruso’s voice”.

Admission is free, but advance registration is required.