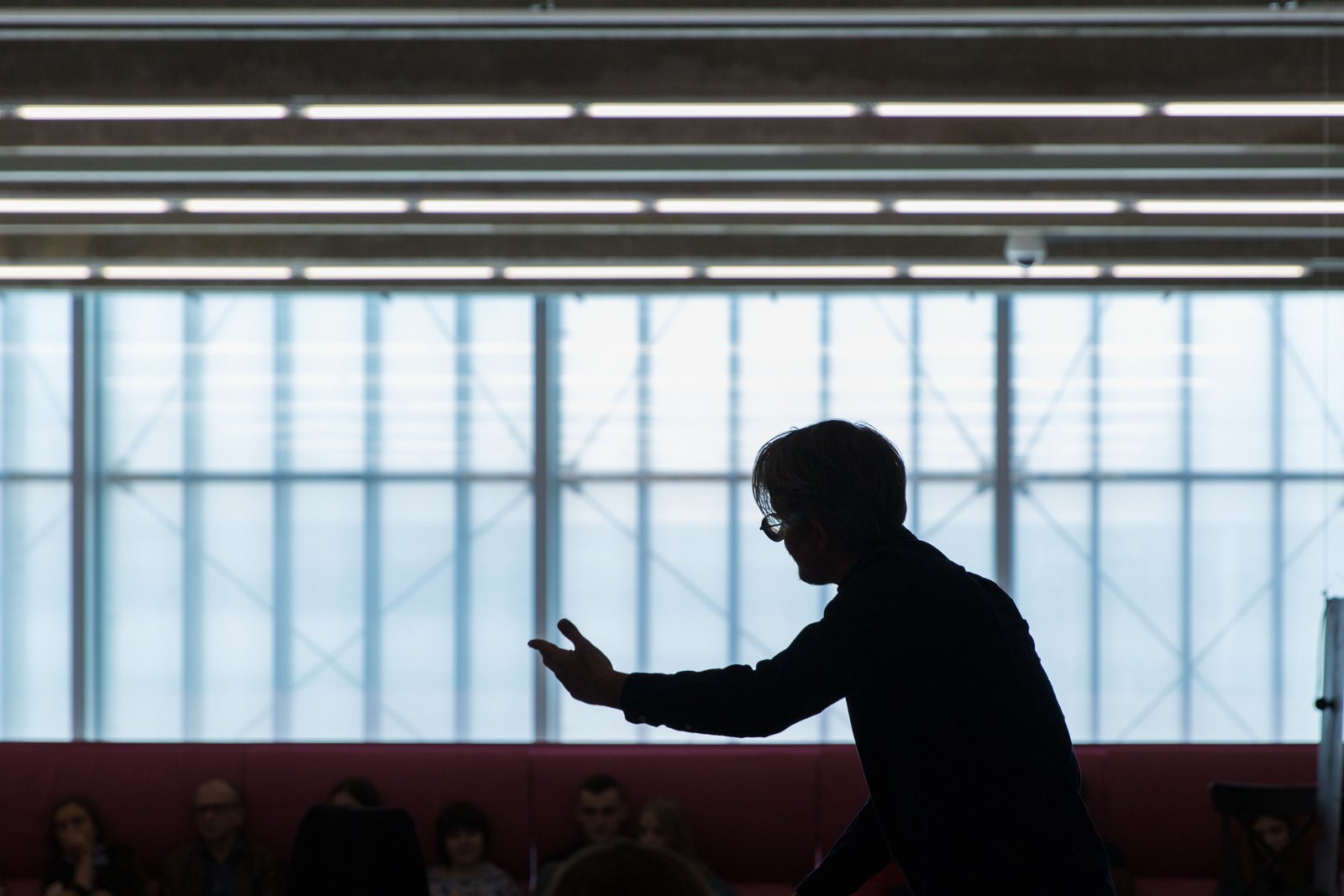 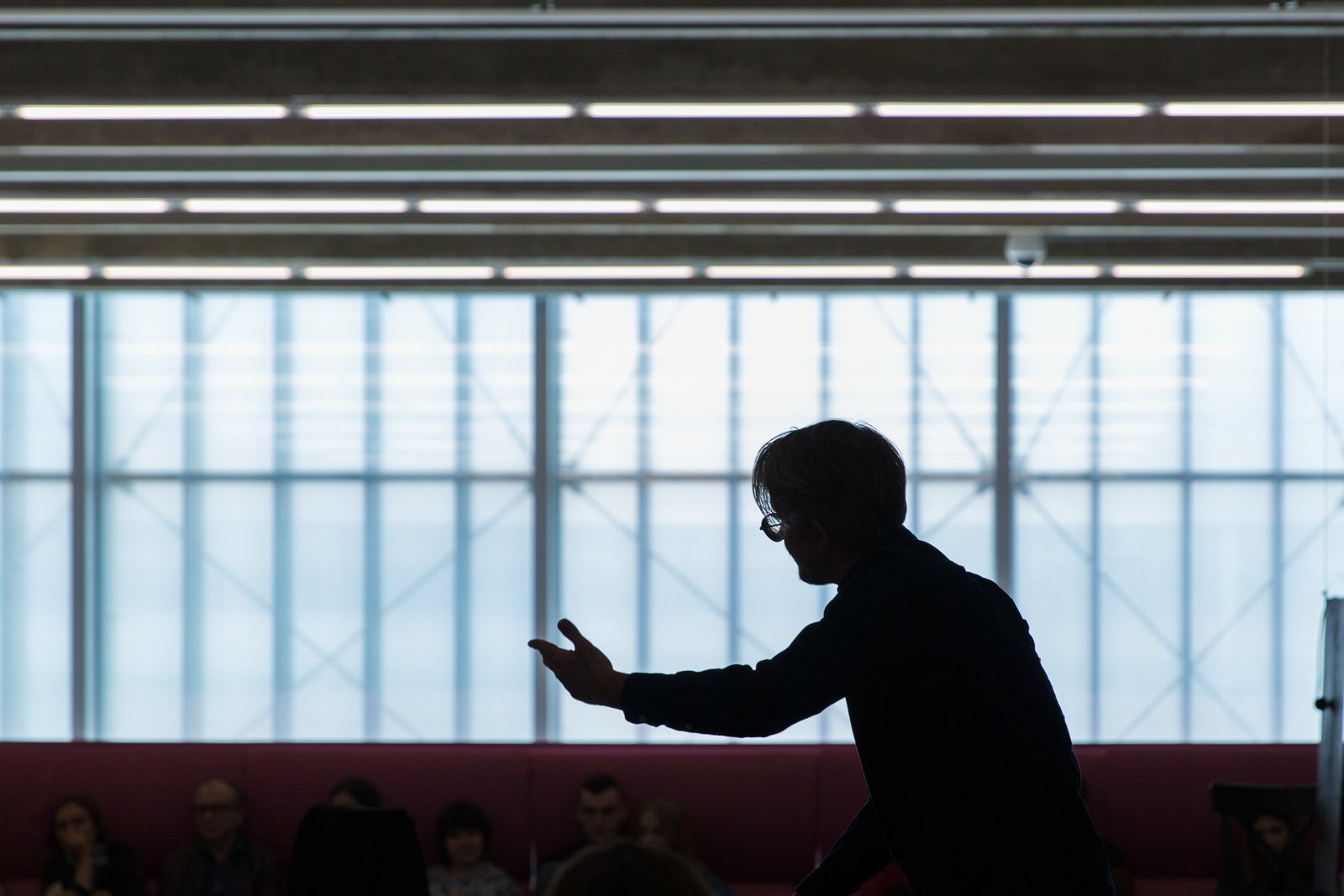 Summing up this experimental project, artist Tarek Atoui, Council group curator Grégory Castéra, and Garage Museum of Contemporary Art curators Anastasia Mityushina and Iaroslav Volovod will discuss the outcomes of the exhibition Infinite Ear and the project A (Mis)reader’s Guide to Listening.

During the final conversation accompanying the show, the participants will discuss the following issues: how much has the exhibition Infinite Ear changed Garage Museum of Contemporary Art? Did it bring any new meanings to the Moscow environment? And did it become a landmark event for the deaf community?

For this exhibition, experimental performative mediation, carried out by the artists Lendl Barcelos, Valentina Desideri, and Myriam Levkowitz as part of the project A (Mis)reader’s Guide to Listening, has played a very special role. Delivered daily at Garage by mediators-performers who had completed training under the artists’ guidance, the mediation focused on experiencing deafness, by engaging deaf and hard of hearing experts in performative practices.

The visitors’ reactions to the experimental mediation implying miscellaneous and often unpredictable interaction with the viewer, varied a lot, with their feedback reports ranging from “sound massage with the mediator was a novel experience, full of relaxation, as if I had slept for seven hours, and also allowed me to discover new skills for comprehending and sensing the world”—to “the exhibitions remain unclear, as we were told that engaging in games with the artefacts was only possible together with special people, who ignored us. Bored.”

During the discussion, curators and artists whose works formed the core of the show and instigated the emergence of performative mediation as a new genre, will be also looking for answers to questions, such as: did the exhibition manage to turn into a platform for practicing the perception of sound? and what are the ultimate results of the mediators’ interaction with the visitors?

Tarek Atoui (b. 1980, Lebanon) is a musician, composer and sound artist. He released his inaugurate album on the Staalplaat Records label in the Mort Aux Vaches series in 2006. In 2008 Atoui was creative director of the studio STEIM (Amsterdam), which worked on the development and production of new electronic music instruments. He has presented his pieces internationally at many forums of contemporary art, including Sharjah Biennale (2009, 2013); Seoul International Biennale of Media Art (2010); Performa 11 (New York, 2011); dOCUMENTA 13 in Kassel (2012); and the 8th Berlin Biennale (2014). He has also exhibited at the world's top museums and galleries, including The New Museum (New York, 2010); Haus der Kunst (Munich, 2010); Serpentine Gallery (London, 2012), and many others. Tarek lives and works in Paris.

Anastasia Mityushina (b. 1982, Moscow) is a curator of public programs, Garage Museum of Contemporary Art. After receiving her Master of Arts in History of Art at Moscow State University in 2004 Mityushina worked as a consultant for two private collections of international contemporary art; managed PR campaigns for the Ural Biennale (2010); and was associate curator at Perm Museum exhibition MoskvApolis (2007). From 2005 to 2007 she worked as project manager for the state museums in Russia overseeing the Pavel Filonov exhibition at the State Russian Museum and the Pushkin Museum of Fine Arts. She is currently Curator of Public Programs at Garage Museum of Contemporary Art in Moscow. Recent curatorial projects include: do it Moscow (co-curated with Snejana Krasteva), Garage, 2014, Art Experiment. In the Studio, Garage, 2015; A Long Happy Life. Building and Thinking the Soviet City: 1956 to Now (co-curated with Ekaterina Inozemtseva), Garage, 2015; COSMOSCOW International Art Fair Public Program, Gostiny Dvor, 2015; Co-thinkers (co-curated with Marya Sarycheva), Garage, 2016; SOTA@GARAGE Performance Festival (co-curated with Dina Khusein), Garage, 2016; If our soup can could speak: Mikhail Lifshitz and the Soviet Sixties (co-curated with Dmitriy Gutov and David Riff) Garage, 2018; Infinite ear (co-curated with Iaroslav Volovod and the group Council), Garage, 2018. Mityushina also contributed to a number of Russian art press including ArtKhronika Magazine, Moscow Art Magazine and ArtGuide.

Iaroslav Volovod (b. 1991, Murmansk) is a junior curator at the Garage Museum of Contemporary Art. He graduated from the Oriental Faculty of St. Petersburg State University and received a master's degree in curatorial studies from the joint program of Bard College (New York) and St. Petersburg State University. He trained at the Central Institute of Hindi (New Delhi) and Heidelberg University, was a member of the TRANScuratorial Academy (Berlin / Mumbai) program, and collaborated with the Calvert 22 Foundation (London), the PRO ARTE Fund for Culture and Art (St. Petersburg), the international organization CEC ArtsLink (New York / St. Petersburg) and other institutions. He was twice nominated for the Sergei Kuryokhin award in the field of contemporary art in 2015 and 2016.

Irina Venskaya (b. 1985, Moscow) is an artist, researcher, and participant in numerous independent dance projects. From 2000 to 2015 she collaborated with various theatrical and dance groups, actively toured and performed at theatrical and festival venues of more than fifteen countries, including France, Switzerland, China, Croatia, Montenegro, Italy, etc. Participant of the action If .... (2015) She is an author of documentary video projects #seeyou and #stoptime (2017). Mediator-performer at the exhibition Infinite Ear (2018).

Free admission with advance registration.
The lecture will be accessible for deaf and hard of hearing visitors and will be interpreted into Russian Sign Language.