Exhibitions
The Fabric of Felicity

The Fabric of Felicity Mobile Guide 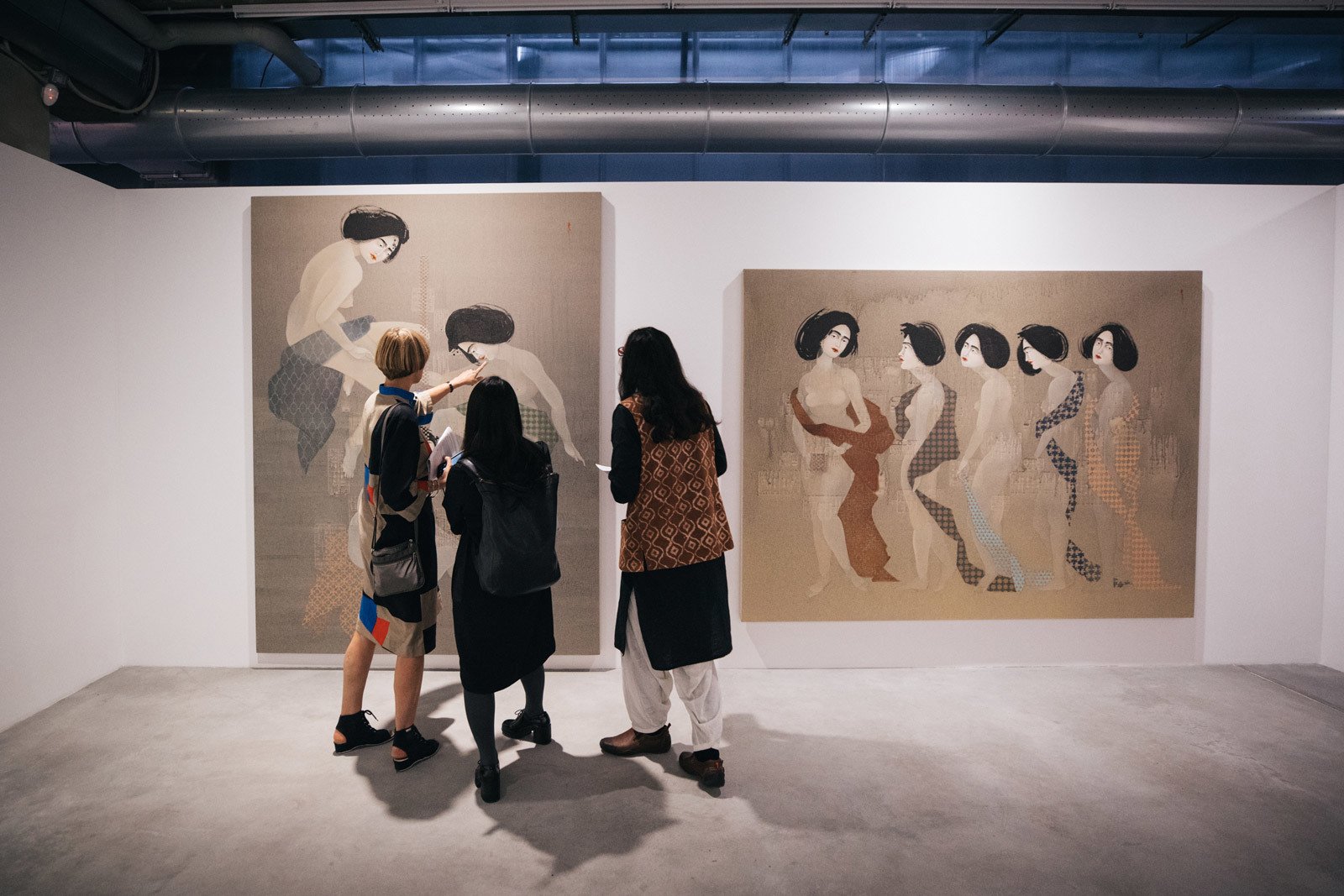 The title of the exhibition hails from Jeremy Bentham’s treatise An Introduction to the Principles of Morals and Legislation (1780), in which the philosopher argues that the path to a just social structure—the “fabric of felicity”—lies in a universal “utility principle.”

Global trade routes and the production cycles of raw materials, fabric, and ready-to-wear garments— the “Silk Road” of the twenty-first century—help define the geography of this exhibition, which is based on research veering from Stockholm to Dhaka, from Ivanovo to Biella, along the way debunking stereotypical notions of East and West, the Global North and South, and affirming the fundamental equality of artistic techniques, methods, and traditions around the globe. As a result, the principles of working with the material emerge as more important than national or cultural borders.

Beyond the context of fashion-as-a-work-of-art, our understanding of clothing is closely connected to the fabric of everyday life, particularly within the sphere of the circulation of objects. In a new project by Narva Alvarado, a sweatshirt with the logo of an American university—a hot commodity in Bolivia’s flea markets—becomes the uniform for students from the university in Warisata, a town largely populated by the indigenous Aymara people. As part of Goldin+Senneby’s piece, Standard Length of a Miracle, fashion designer Tigran Avetisyan created work clothes for the Museum invigilators from garments left behind in the dry cleaners of Moscow and St. Petersburg. For her project, Second Hand, Zhanna Kadyrova “sewed” a dress from the tiles decorating the interior of the Museum.

The processes governing our appearance, both macroeconomic and symbolic, can be described by the speculative concept of “Krishna Capitalism,” in which the Indian god Krishna and Capitalism as a social formation each play a significant role in the global circulation of looks and clothes, dictating colors, cut, and working hours. They are both complicit in overproduction of textiles, either as a woman’s guardian deity in the case of Krishna or as a driver of fast fashion’s ubiquity in the case of capitalism, and in the situation of contemporary textile industry their invisible hands are morally ambiguous. Several of the artists examine these processes in politics and society through the prism of clothing and the textile industry, with the clothing itself often serving as a metaphor for the victims of humanitarian or ecological catastrophes. Examples of this type of work can be found in Kamruzzaman Shadhin’s Haven is Elsewhere or Kader Attia’s installation La Mer Morte (The Dead Sea). The struggle for rights for workers in the textile industry—a problem that has vexed society since the middle of the nineteenth century—often appears as the subject matter in projects at the intersection of art and political activism. Alice Creischer and Andreas Siekmann use the visual means of infographics to compare the strikes of Indian textile workers in 1982 with the boycotts of Italian factories in the 1970s. The photographs of Vladislav Shapovalov depict flags with the names of workers from textile factories in the Italian city of Biella, while Taslima Akhter’s photo documentation from the site of the sewing workshop that collapsed in Bangladesh in 2013 speaks to the fate of the newest victims of the “fast fashion” industry.

The majority of the works presented here are located between two conceptual poles: the uniform and the universal form. The photographs of Candida Höfer capture museum restorers in their coveralls, protecting them from the (sometimes literally) toxic legacy of a colonial past. Farrah Karapetian notes the near-universal attire of political activists, allowing those protesting in Egypt to “slip under the radar” of the police. Taking a form reminiscent of a museum of natural history, Sharon Kivland’s installation catalogues the dress codes from the era of the French Revolution. In his video, The Street and Modern Life, Hans Eijkelboom blurs the boundaries between everyday attire and a uniform, while the collective Factory of Found Clothes confronts gender codes by having the uniformed cadets of the naval academy carry white dresses, a universal sign of the “feminine.”

The search for a universal form is something that has fueled the historical avant-garde, as well as postwar abstraction. The Fabric of Felicity surveys major developments in the avant-garde’s experiments with textiles, from the formulation of a rational outfit, unfettered by fashion trends, to new geometric patterns for fabric. Liubov Popova and Varvara Stepanova saw in such developments an egalitarian potential far removed from the kingdom of flowers and paisley patterns of the old world, with its rampant inequality. In the sketches of Ellsworth Kelly, one can observe the opposite impulse: a progression not from abstraction to clothing, but rather from clothing to abstraction. Both vectors converge in Alexandra Galkina’s painting series Skirts.

Clothing as a medium for engaging in conversation with one’s ancestors and the spirits is one of the focal points for artists working with “chthonic fashion.” Lydia Masterkova builds her Palace from fabrics found in destroyed churches and her grandmother’s trunk, creating a spiritual reality parallel to Soviet modernization literally from scraps. In the work Ciguapa Pantera, Firelei Báez addresses the mythology of her home country, the Dominican Republic, while Hayv Kahraman turns to traditional Persian and Arabic miniatures in her search to understand her own identity, and Portia Zvavahera’s painting brings symbols from the mythology of India and Zimbabwe together under a single veil of translucent fabric. These works about the legendary past and mythological creatures are joined by a photograph by Athi-Patra Ruga, depicting a grotesque image of a future citizen of the utopian country of Azania.

A separate section is dedicated to the “birthday suit.” According to fashion historian Anne Hollander, in European culture, nudity was accepted as a special type of attire, a visual extrapolation of “with native honor clad.” An ironic variation of this “outfitting” can be found in the works of Huguette Caland, Katalin Ladik, Rimma and Valeriy Gerlovin, and Jimmy DeSana. The political aspect to nudity is explored in the photographs of Pedro Valtierra, capturing the naked strike of Mexican miners, which took place in 1985.