To visit the exhibitions you must buy a timed ticket online in advance.

FROM 2010
PERFORMANCE ART
IN RUSSIA
This is the first research initiative to explore the medium's history and traditions in Russia.
Spanning the early experiments of the Futurists at the turn of the 20th century to the radical actions of today, the project also emphasizes the significance of Russian performance in an international context, while introducing Moscow audiences to practices that have influenced the global development of the genre.

Research began with the presentation of 100 Years of Performance (Version 3, Moscow) (June 19-September 17, 2010) curated by RoseLee Goldberg, director of Performa, New York, and Klaus Biesenbach, now director of MoMA PS1 and chief curator at large at the Museum of Modern Art, New York. Described by the curators as a "draft to be added to," the exhibition was a comprehensive yet incomplete history of performance, to which Moscow-based artists, historians, and researchers were invited to propose new material. This resulted in the permanent addition of works by Oleg Kulik, Radek Community, The Blue Noses, and Elena Kovylina, and the beginning of a number of informal conversations locally between professionals who started to question the historicization of performance art in Russia, or lack thereof.
The exhibition 100 Years of Performance, installation view, Garage Center for Contemporary Culture, 2010
© Garage Museum of Contemporary Art
Adding to this piqued interest, while taking advantage of the international platform afforded by the show, Garage also organized Moscow's first International Performance Festival, which took place over 11 days from September 4–14, 2010. This, together with an extensive lecture series, enabled a new, broad audience to experience a diversity of performances firsthand, meet practitioners from around the world, and hear more about the nuances of the genre.
In 2011, Goldberg invited Garage to participate in New York's fourth international visual art performance biennial Performa 11, which
used Russian constructivism as one of its themes. This resulted
in the exhibition 33 Fragments of Russian Performance (November 2–23, 2011), which took place at the Performa Hub in Manhattan and included documentation of both the historical avant-garde in the 1920s as well as contemporary examples the 1970s onward.

This curatorial approach set the precedent for one of the most important aspects of the entire research project: the impact of the interrupted trajectory between prewar and postwar epochs of performance, as well as the effects of a nearly 30-year totalitarian government are re-examined for the first time, to understand the inconsistencies and developments of the genre through the decades.
A second priority for the research was to bring to the fore the specific features of local practices in Russia, both historically and now, and to chart the rootedness of the art form in the political context of the country. To make an in-depth analysis, a series of ten closed-door roundtables were developed from 2011 to 2012, bringing together specialists in theater, gender studies, art history, music, the avant-garde, and contemporary performance, to discuss various issues that are problematic when developing a comprehensive history, such as the genesis of performance as an independent art form; the criteria
for the classifications of various types of performance; the question
of terminology in the Russian language; and the use of performance in political activism. In parallel, Garage's archive department began
to conduct video interviews with artists, building an oral history of the practice, which is an initiative that has continued ever since. 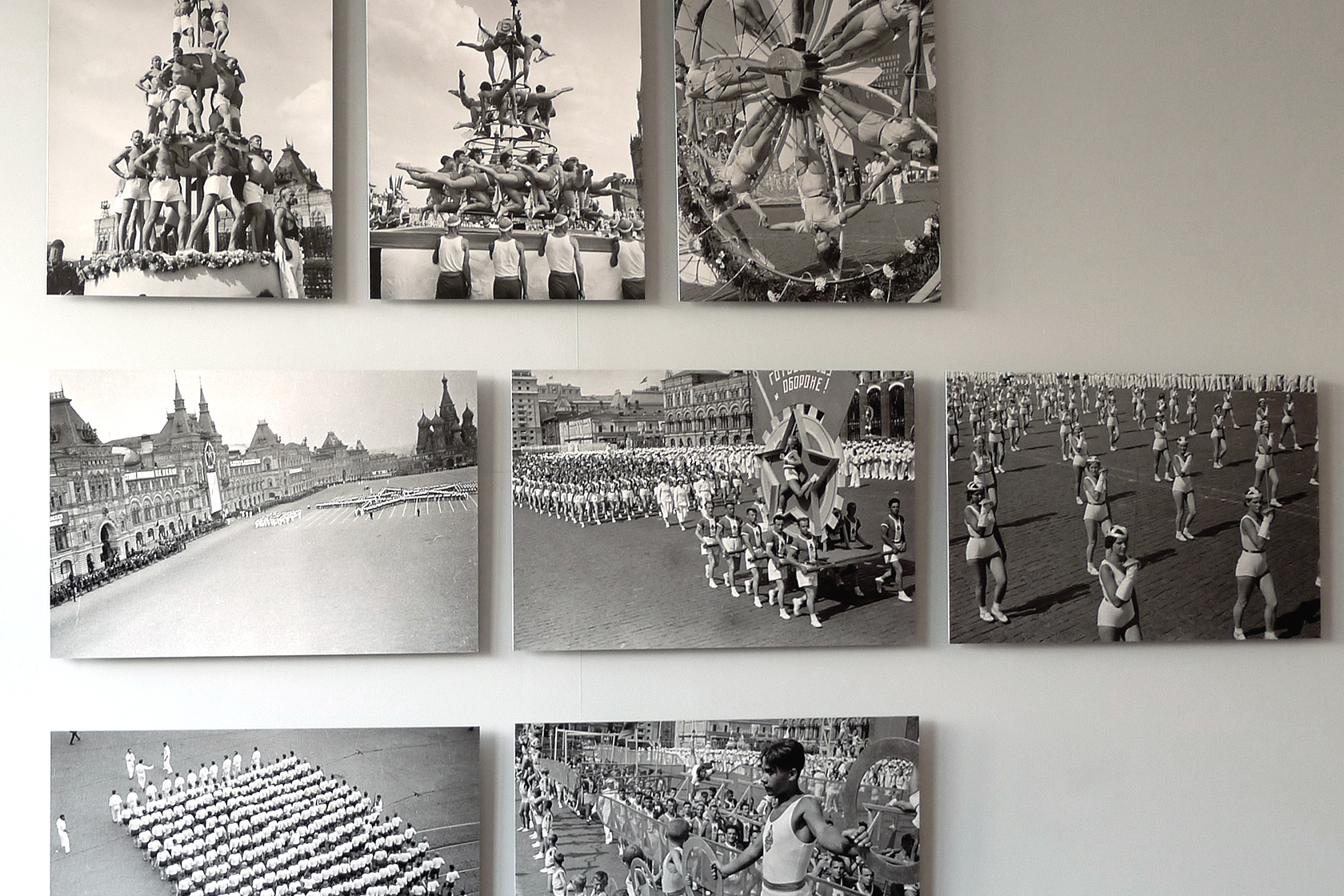 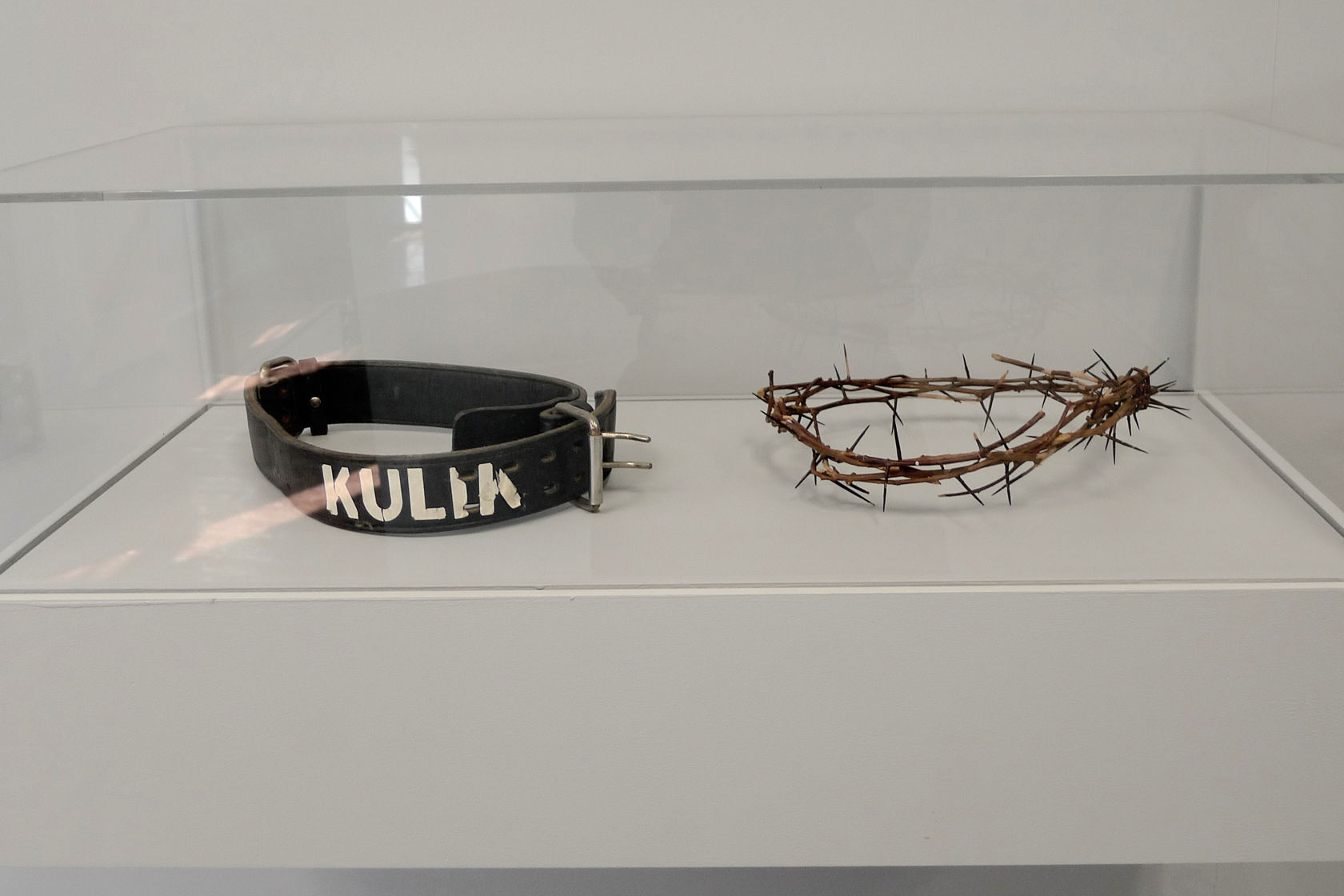 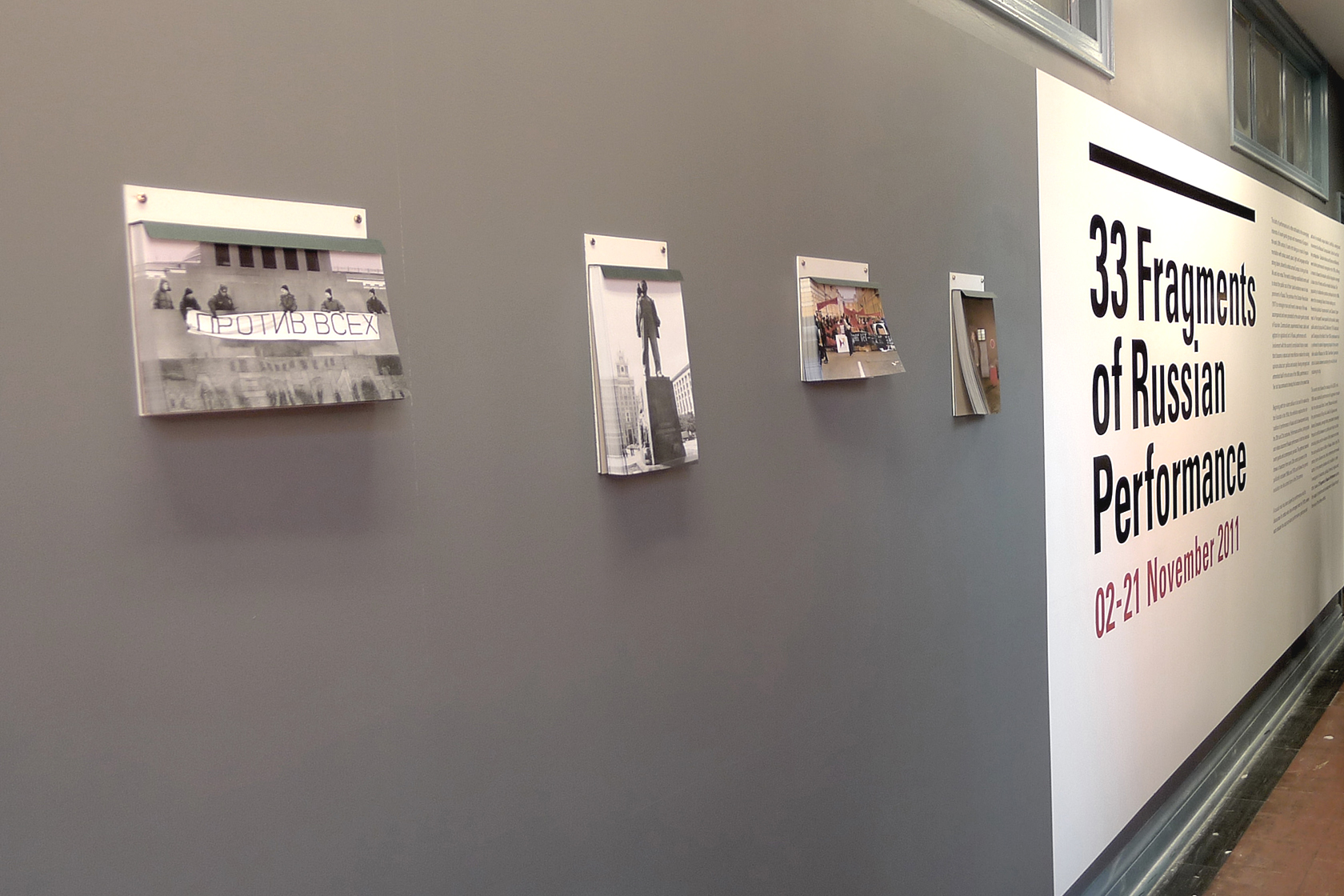 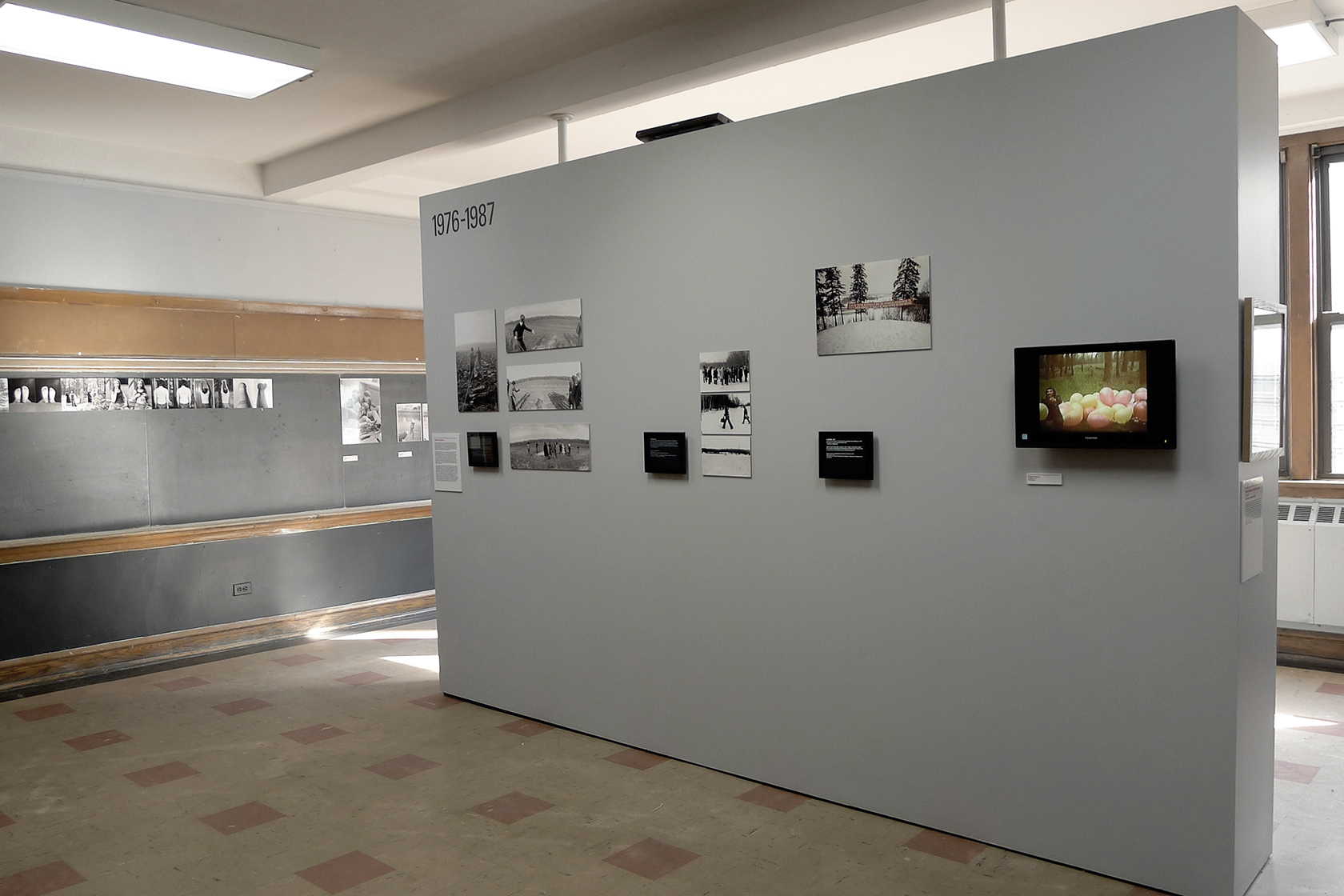 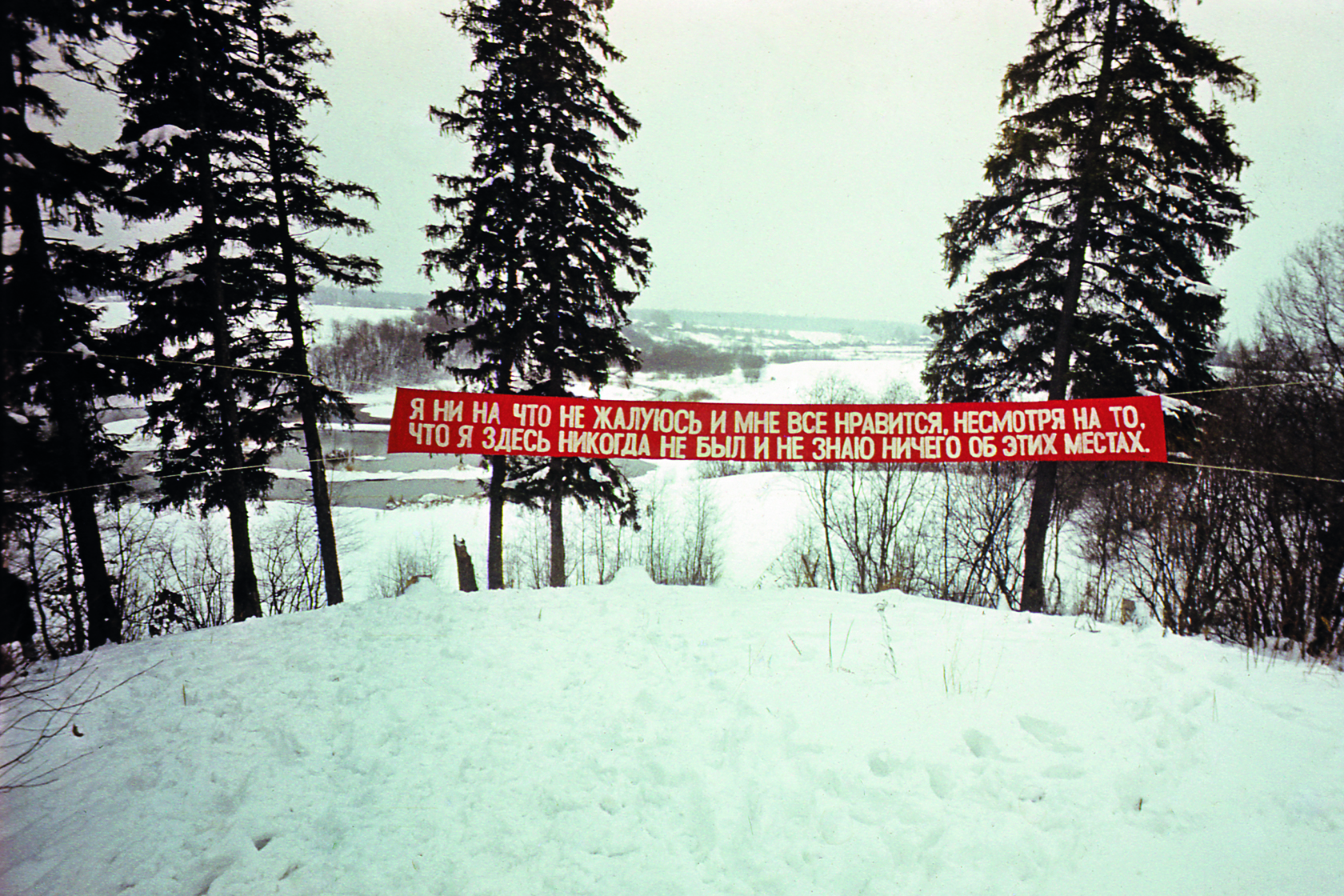 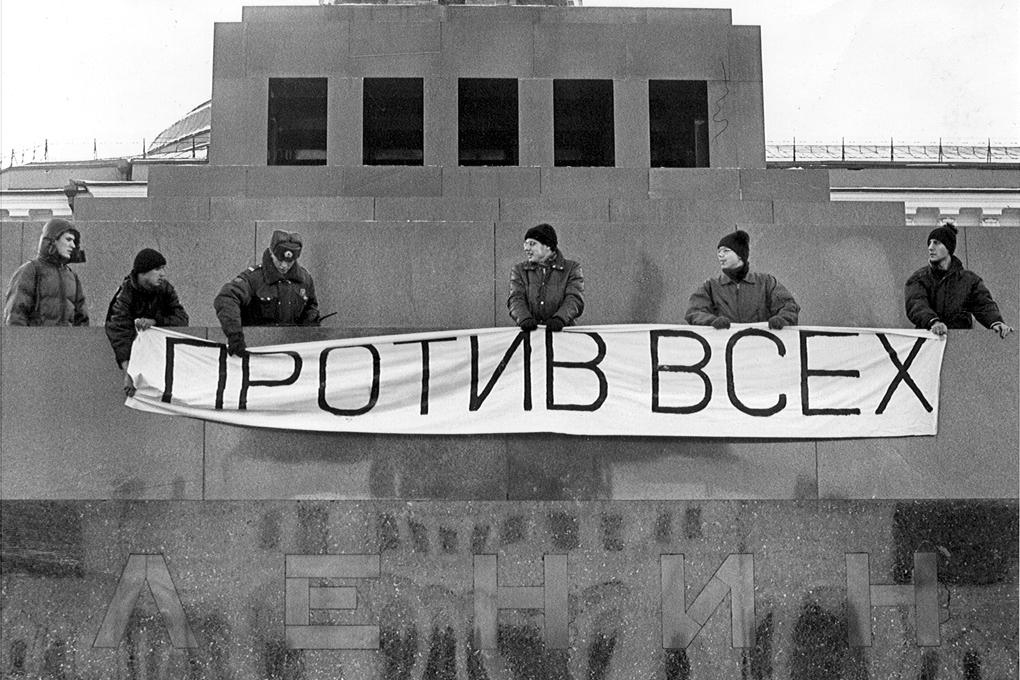 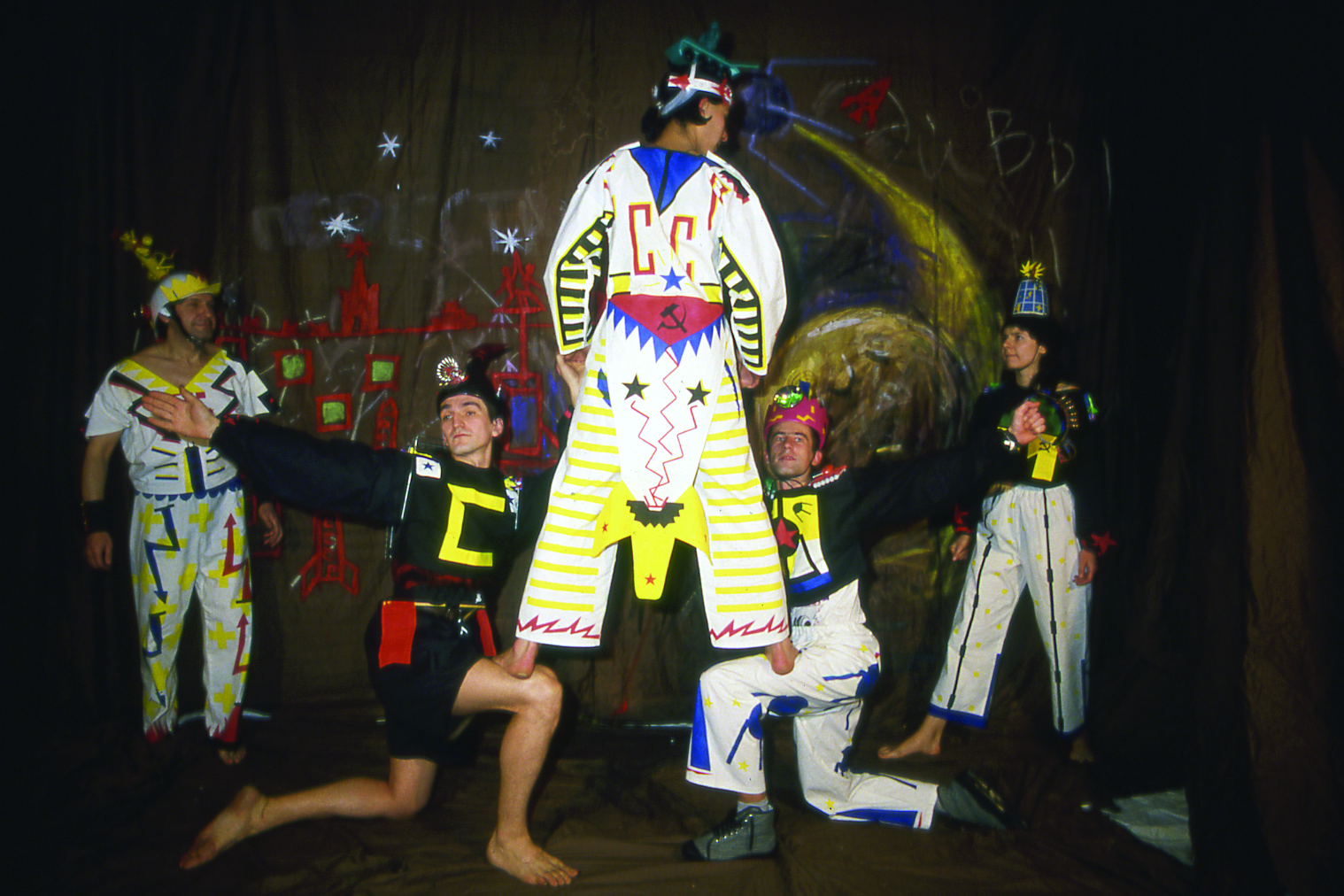 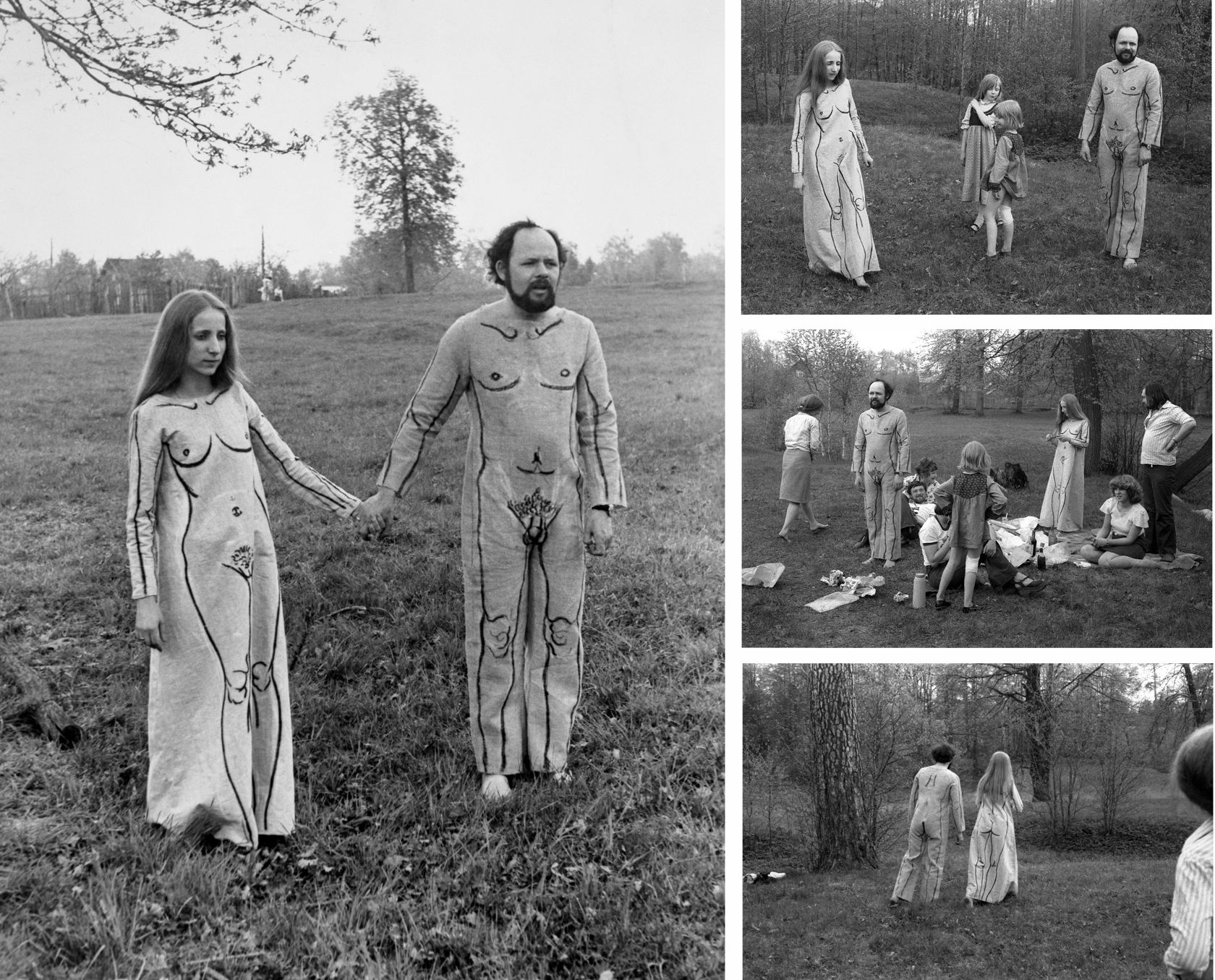 The exhibition 33 Fragments of Russian Performance, Performa Hub, Manhattan, 2011
Furthermore, to expand reference material available to the Russian public, Garage embarked on translating Goldberg's seminal book Performance Art: From Futurism to the Present with the addition of a new chapter—"Raising the Curtain on Russia"—giving an overview of Russian performance since the 1970s.
Book Launch. Performance Art: From Futurism to the Present by RoseLee Goldberg

Reflecting on some of the key issues that arose through the roundtable discussions, while also celebrating the centenary of performance art in Russia, Garage developed its first international conference on the topic in December 2013, which was the anniversary of the seminal Cubo-Futurist performance Victory Over the Sun created by Kazimir Malevich, Alexei Kruchenykh, and Mikhail Matyushin in St. Petersburg in 1913.

Returning to an international perspective, but continuing to explore performance in relation to the political contexts through which it is formed, the two-day event consisted of case studies, panel discussions, and lectures, with contributions from leading artists, academics, writers, and curators from across Russia, Eastern Europe, Asia, Africa, and Latin and North America. Recognizing that artists have continuously defied and challenged not only pre-established artistic traditions but also social and moral conventions to go beyond aesthetics and introduce an ethical dimension to the experience of art, the conference was titled Performance Art: Ethics in Action (December 12–14, 2013) and addressed the complex relationship between ethics and aesthetics in the development of performance around the world today.
The exhibition Russian Performance: A Cartography of its History, installation view, Garage Museum of Contemporary Art, 2014
© Garage Museum of Contemporary Art
A year later, the exhibition Russian Performance: A Cartography of Its History (October 17–December 5, 2014) was the most ambitious project Garage has undertaken to present what has now amassed into a substantial body of knowledge and material on Russian performance art and its histories. Throughout the preparation of the exhibition, two concerns recurred: accuracy and authenticity toward historical facts and the animation of predominantly archival material in a way that enables audiences to become as immersed in the discovery of the multifarious approaches to performance as Garage was throughout the research. A book (in Russian and English), published to coincide with the exhibition and compliment the visual journey that it embodies, contains the core aspects of the research undertaken over the last four years. 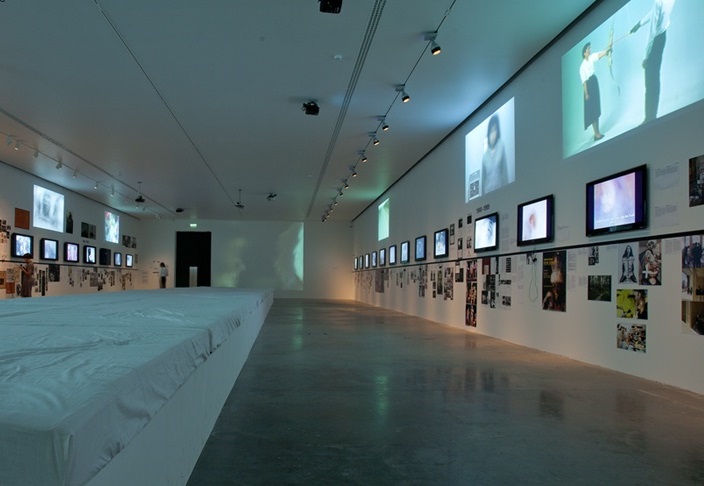 100 Years of Performance
The exhibition curated by Klaus Biesenbach and RoseLee Goldberg traced the development of performance art over the past century with a wealth of assembled archival documents, photography, film, and audio materials, culminating in a performance festival. 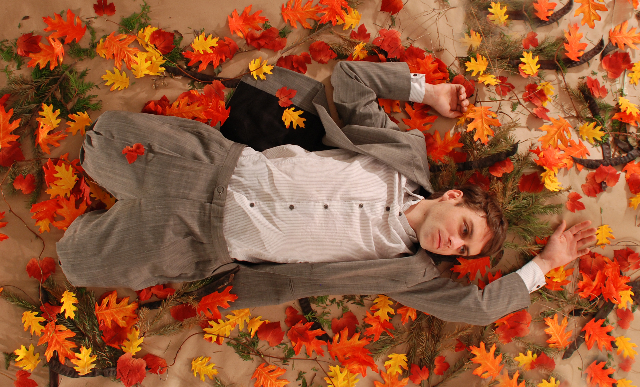 The First International Performance Art Festival
The festival, part of the traveling exhibition 100 Years of Performance, showcased the extraordinary diversity of performance art, as over 10 artists presented work that spanned an enormous variety of working practices which challenge the Garage audience to engage in different ways. 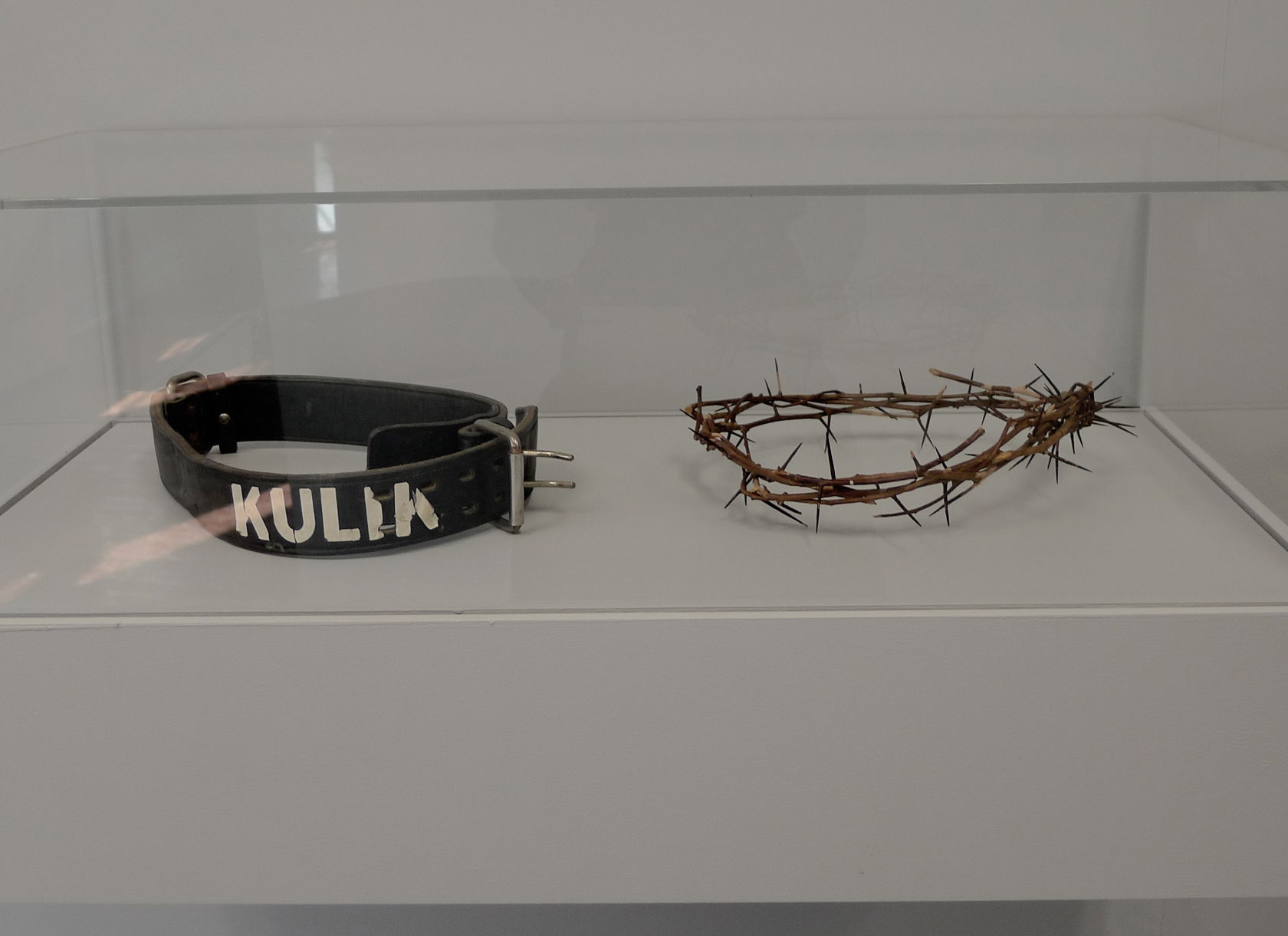 33 Fragments of Russian Performance
The exhibition included performance archives, photographs and videos documenting Russian performance in both the historical avant-garde of the 1920s and contemporary periods.

Interview with Russian performance artists
Within the frames of Garage's First International Conference Performance: Ethics in Action, our Research department has conducted a number of interviews with leading Russian artists in the given field. 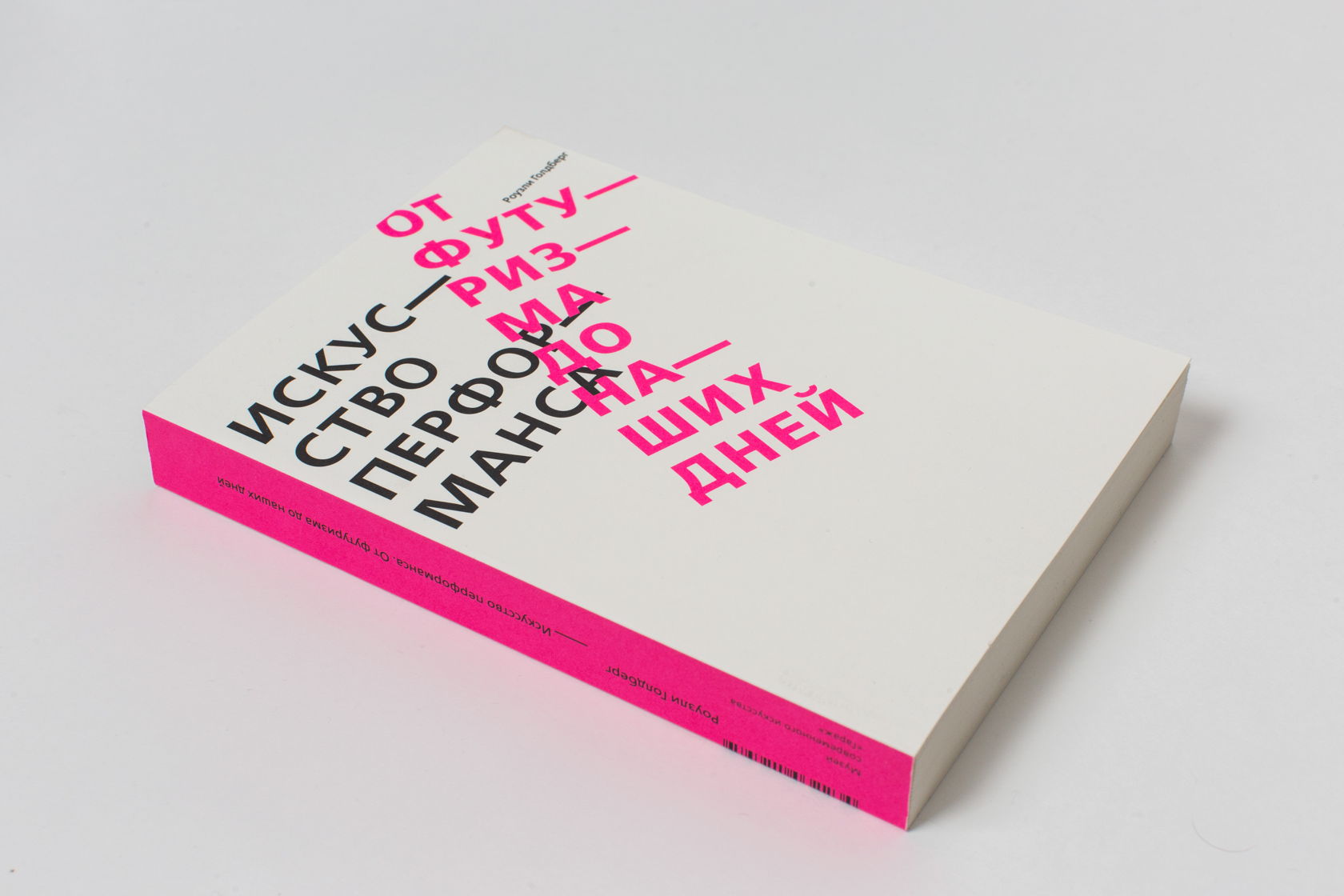 Performance Art: from Futurism to the Present, by RoseLee Goldberg
Goldberg's monograph about the hundred-year story of performance art is the most comprehensive history of the genre to date. 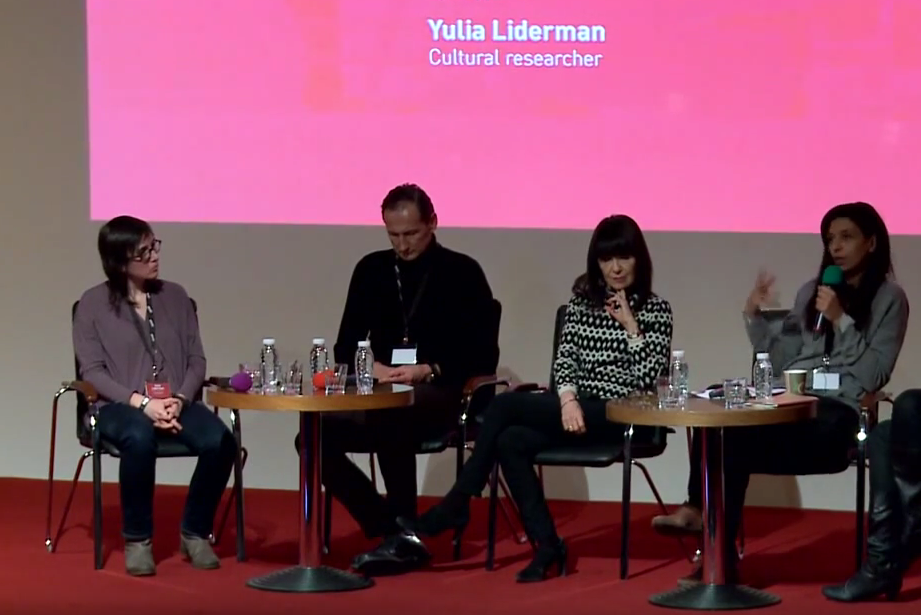 Conference "Performance Art: Ethics in Action"
To mark the centenary of performance art in Russia and to explore the complex relationship between ethics and aesthetics in the development of performance today, Garage presents its first international conference. 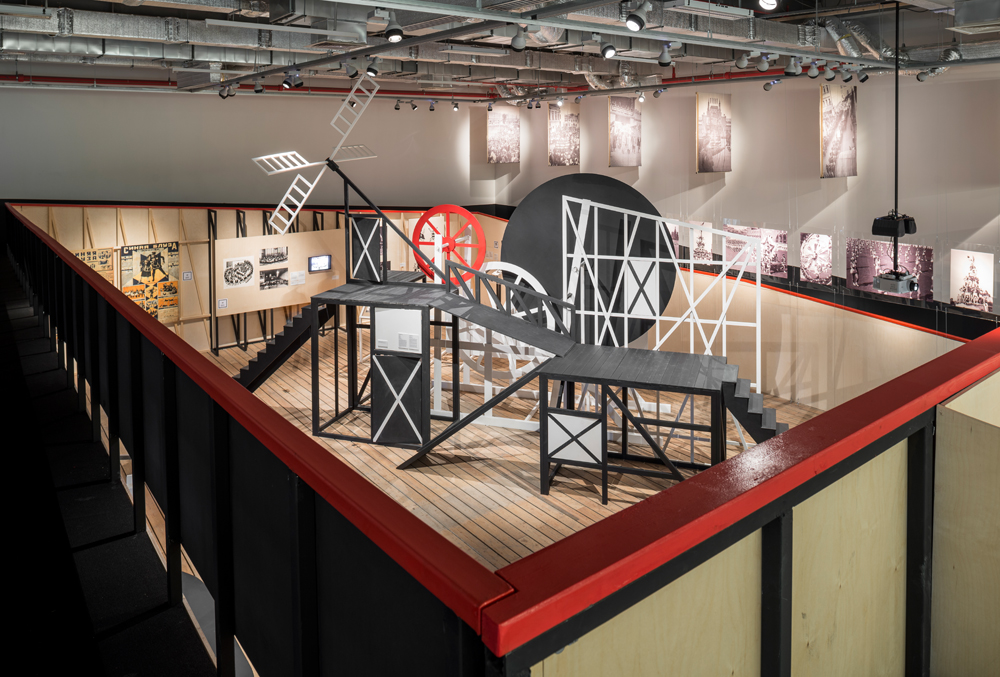 Russian Performance: a cartography of its history
This is an information resource in support of the exhibition of the same name providing access to the research materials gathered over the last four years.